PGA Championship 2019: The elite company Brooks Koepka joins with this win (and the company he could join)

FARMINGDALE, N.Y. — Brooks Koepka is a major champ once again after his victory at the 2019 PGA Championship at Bethpage Black on Sunday. With that, the all-too-familiar question we ask after any golfer wins another major title reemerges: “What does this win mean for their legacy and place in the history of the game?”

For the 29-year-old Koepka, his fourth major title further catapults him into the same breath as some of the greatest champions this sport has ever seen — Koepka keeps rising higher into rarefied air.

He’s now the 29th golfer to ever capture four major titles. The last to accomplish this was Rory McIlroy, who won his fourth major at the 2014 PGA Championship. Koepka is now tied with the aforementioned McIlroy and Ernie Els for the third-most major titles among active players.

But Koepka didn’t just win his fourth major title; he won his fourth championship in his last eight major appearances. He’s batting .500. That’s pretty darn good. With at least one major win over the last three years, Koepka now joins a list of seven other golfers who have achieved the same accomplishment since 1934.

The last to ever win four at the same pace was Tiger Woods in 2005 and 2006. The only two others who have won four majors in an eight-event span are Jack Nicklaus and Ben Hogan.

And he’s doing this all before his 30th birthday next May. He’s the only under-30 golfer on Tour with four major titles, and he has the third-most major titles of all-time before turning 30. 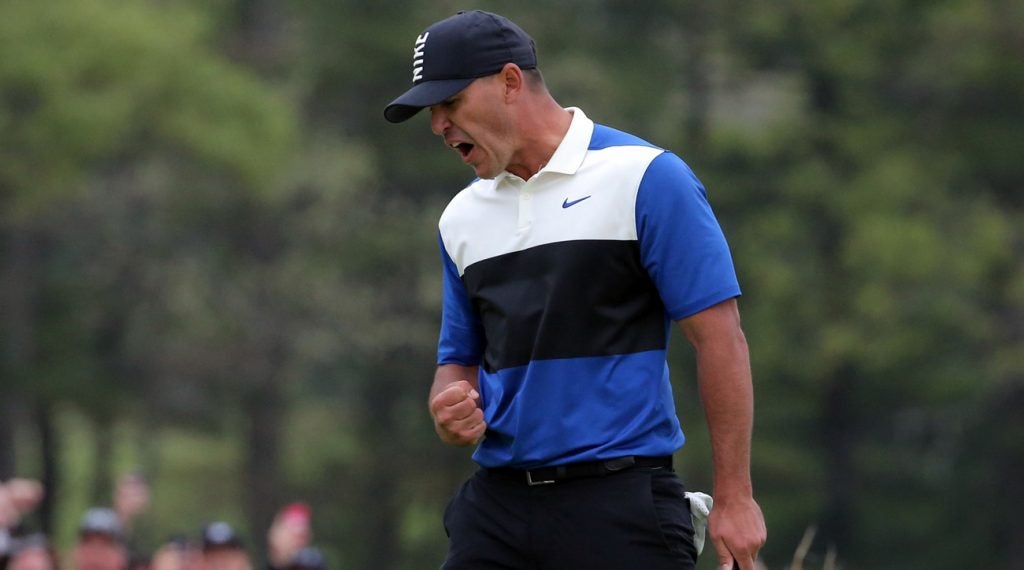 But there’s more. Koepka becomes the first back-to-back PGA champion since Woods in 2006 and 2007. He’s now the sixth to win back-to-back PGA Championships, and the 20th to capture multiple PGA titles in his career. He’s tied with McIlroy and Vijay Singh for the second-most PGA titles among active golfers, with Woods having the most at four.

While his most recent major victories have come at the last two PGA Championships, his dominance started with the U.S. Open in 2017. Let’s not forget; the man is the winner of the last two national championships. Koepka said on Sunday after his win that tourney over the last few years has been quick, but fun.

“It’s incredible,” Koepka said. “I don’t think I even thought I was going to do it that fast. I don’t think anybody did, and to be standing here today with four majors, it’s mind-blowing.”

News
2019 PGA Championship: Dustin Johnson needs to learn when not to hit the hero shot

Next month, the 2019 U.S. Open heads to Pebble Beach. History will already be made when the third major of the golf season is held during the iconic course’s 100th birthday year. But Koepka could create even more history with a win out west in June.

A third straight victory at the U.S. Open would make Koepka the first player to win three consecutive U.S. Open titles since Willie Anderson went back-to-back-to-back in 1905. That’s over 100 years ago — before Pebble Beach Golf Links even existed. The last time a three-peat at a major occurred was at the British Open in the 1950s when Peter Thomson captured three straight Claret Jugs.

Koepka would become the seventh to win at least three U.S. Open titles in his career and the first since Woods’ triumph in 2008. More importantly, a win for Koepka next month would give him five major titles. Only 19 players have accomplished that feat, and none since Phil Mickelson in 2013. In fact, a fifth major championship would tie Koepka with Lefty for the second-most major titles among active golfers. Second only, of course, to Eldrick Tiger Woods.

Lastly, a U.S. Open victory next month would give Koepka five wins in his last nine starts in major events. The last to ever do that? Oh, that Tiger guy from 1999-2001. Koepka’s dominant run has certainly been Tiger-esque.

When asked after his victory how to describe his recent string of success under the brightest lights in golf, Koepka kept it simple: “Phenomenal. I think that’s a good word.”

“It’s been a hell of a run,” he continued. “It’s been fun. I’m trying not to let it stop. It’s super enjoyable, and just try to ride that momentum going into Pebble. I mean, four of eight, I like the way that sounds.”

If Koepka continues to play and dominate the way he has for the last two-plus years, it’s going to sound even sweeter as the wins pile up.

Sunday is surely not the last time Brooks Koepka’s name is etched into the history books. He’s part of some very special company, and that seems likely to continue as his illustrious career rolls on.