2019 PGA Championship: Dustin Johnson needs to learn when not to hit the hero shot 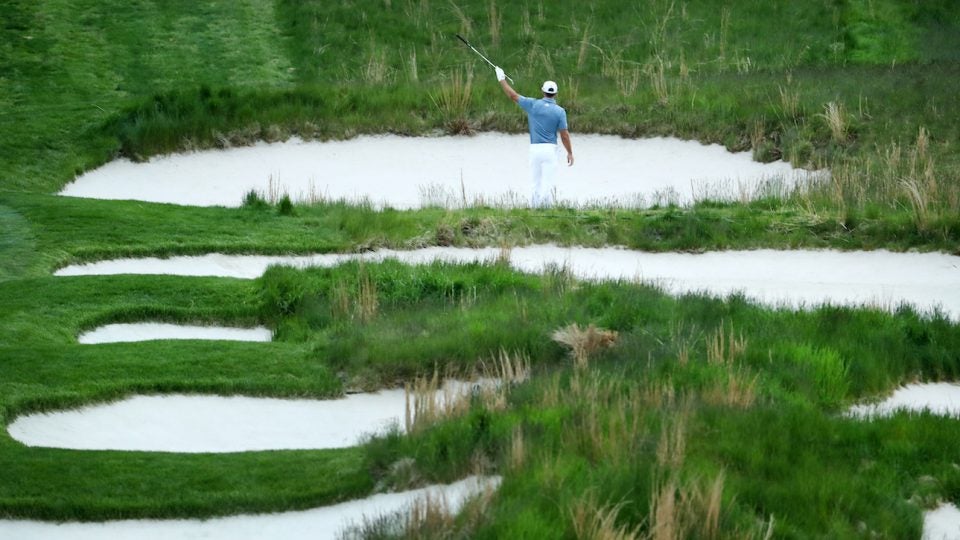 FARMINGDALE, NEW YORK - MAY 19: Dustin Johnson of the United States plays a second shot on the 18th hole during the final round of the 2019 PGA Championship at the Bethpage Black course on May 19, 2019 in Farmingdale, New York. (Photo by Jamie Squire/Getty Images)
Getty Images

FARMINGDALE, N.Y. — Dustin Johnson was three-under on the day and fresh off another birdie. Brooks Koepka was bleeding, his seven-shot lead from the start of the day down to one. Johnson had fewer holes left to play — a key advantage on a windy day at treacherous Bethpage Black — and the swelling crowd was growing increasingly hostile towards Brooks in front of his eyes.

That was the moment on Sunday when everybody thought the Wanamaker trophy might actually fall to DJ.

Two holes later, Johnson had slipped with back-to-back bogeys, and Koepka’s victory was a mere formality. The “Koepka Coronation,” as Jim Nantz later dubbed it, was secure.

That Dustin had vaulted into the conversation at all was a testament to his undoubted and generational talent. You can’t dog the guy for applying the pressure on what was deemed a non-issue win for most of the week. But the manner in which his attempt stalled illuminated why the one-time major champion ended the day with the unenviable prize of finishing runner-up in all four majors, while a man who wasn’t on the map just a few years ago just lifted his fourth. The shot that was ultimately Dustin’s undoing was his second into the 16th where, from the middle of the fairway, he tried chasing a back pin, flew a 5-iron long from 195 yards and short-sided himself.

“The wind was howling in my face. I hit a 5-iron, but almost went back and got a 4-iron because I didn’t think the 5 was going to even come close, based on the shots that I’ve hit, earlier in the round, into the wind,” he said afterwards.

“I hit the shot I wanted to right at the flag. I don’t know how it flew 200 yards into the wind like that.”

By all accounts, Johnson’s shot was well-reasoned, and he executed the way he wanted, only for the shot to get unlucky.

It’s golf, and it happens. But context is also important.

The 16th is a difficult hole, and lots of players walked away making bogey. But no other player who finished inside the top 10 managed to miss long on the 16th hole. Neither did his playing partner, Hideki Matsuyama, who hit his approach before DJ. Koepka, for his part, finished on the front of the green, leading to a foolproof par. Yet somehow DJ found a way. He missed long because he picked the club that would get back to that pin, not one he needed to play for the center. It opened the door to what eventually happened: An adrenaline-fueled shot that led to him missing in the worst, most inexcusable spot.

Dustin hit a an excellent flop shot but compounded the error by missing a short, pressure-packed par put. He flared his shot on the par-3 17th right and chunked his chip, leading to another bogey, then pulled driver and missed right again on 18, thwarting his last remaining opportunity to apply some fading pressure on Brooks, who parred the final hole to win by two.

It strikes a common theme for DJ. Pressure gets on, a management error here, compounding the error there, and another close call to end it.

Back-to-back bogeys drops Dustin Johnson to 3 back of Koepka.#PGAChamp pic.twitter.com/lsSwfTw2yo

The crux of DJ’s issue in major-pressure situations like this isn’t his ability, which can’t be questioned, but his ability at managing the situation in front of him.

Knowing when to downshift, when not to miss in exactly the wrong spot and then compound the error multiple times over. Knowing, as all the greats did, that he doesn’t need to chase a pin like that on 16 when he’s between a 5-iron and 4-iron. Miss short — basically anywhere short — and the pressure switches back to Brooks, the player who wants it least. The crowd raises the tension, the moment shifts and in an instance, Johnson becomes the favorite.

It doesn’t happen by hitting the hero shot. It happens by knowing when not to.

Johnson will win more majors on talent alone, but he still has more to learn. He needs another gear. One that’s not the product of raw talent or otherworldly power but that thrives in golfers with a lack of it. He needs a Faldo-style dose of realism into his game. When — if — he learns that, then Dustin Johnson will realize his true potential.