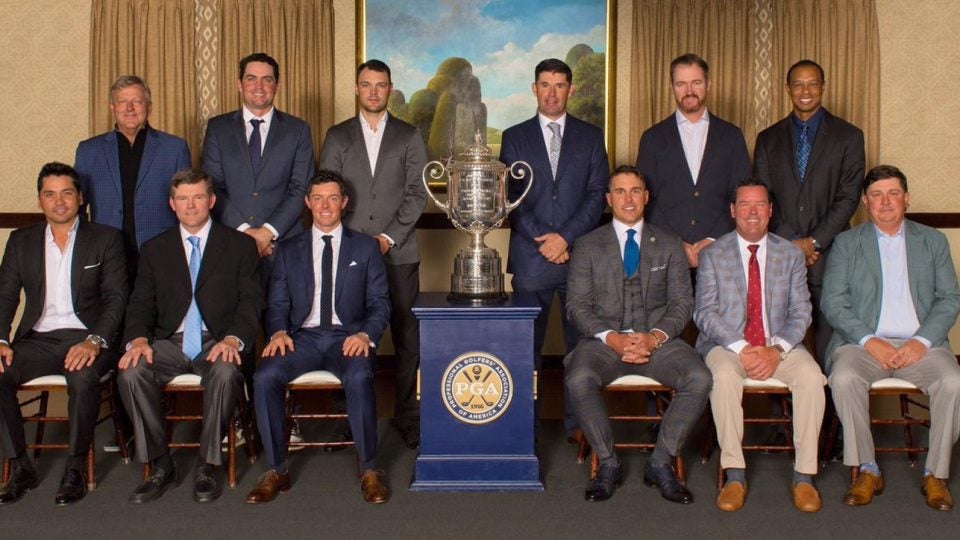 The Masters isn’t the only major that fetes its defending champion with a dinner full of former winners. The PGA Championship has a champions dinner, too. Tuesday night, it was Brooks Koepka’s turn in the winner’s throne.

Several past PGA champions gathered for a dinner to celebrate Koepka’s triumph at the 2017 PGA at Bellerive just eight months ago. Among the star-studded dinner party guests were Tiger Woods, Rory McIlroy and Jason Day.

The PGA Championship sent out this group photo with the Wanamaker trophy from the evening.

Suspiciously absent from the photo is Phil Mickelson, who won the 2005 PGA Championship at Baltusrol (earning his spot at the dinner) and is in the field this week. Also missing was 1992 champion John Daly, who the PGA of America approved to use a golf cart during the tournament at Bethpage.

News
#AskAlan mailbag: Will Tiger Woods win the PGA Championship by 10 or 15 shots?

The guests were treated to a high-class meal selected by Koepka. The defending champion started them off with a heritage club salad with pork belly. For the main course, the PGA champs got to choose among three options: Miyazaki beef from Japan, roasted Long Island duck, or a Branzino filet. They finished of the meal with a carrot cake desert.

Check out the full menu below.

Your first look at the menu chosen by @BKoepka. pic.twitter.com/NZhpF21TCF

Of course, Koepka’s girlfriend Jena Sims was in attendance to help the 2018 champion celebrate (although it’s not clear if spouses and significant others were invited to the actual meal). Sims posted a photo of the two posing with the Wanamaker trophy, along with the caption “Lady and the Champ.”

While Woods is the betting favorite to win the PGA, Koepka likely has the best shot at winning (at least according to our experts). Capturing back-to-back PGAs after doing the same at the U.S. Open last year would be an incredible accomplishment. But we’ll have to wait until Sunday to find out who will host next year’s PGA Champions dinner.