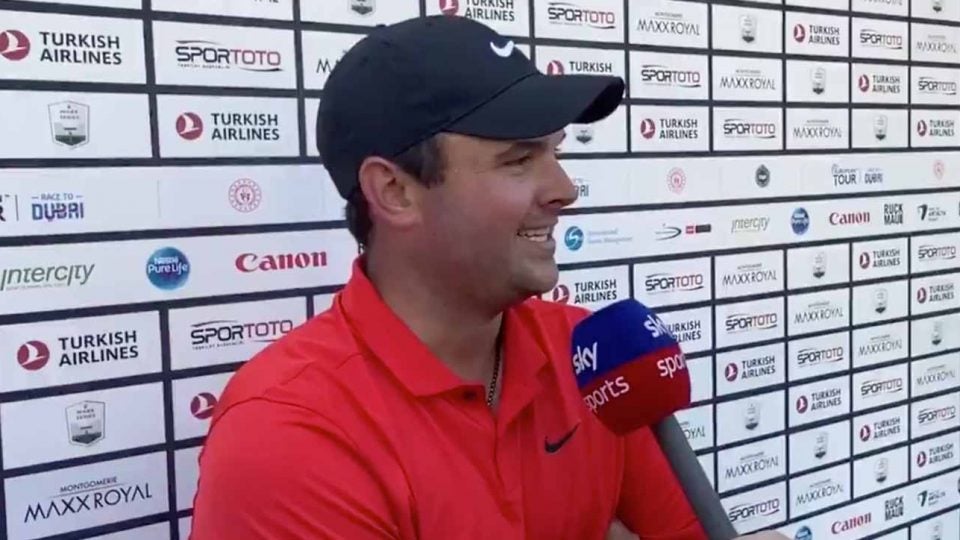 Patrick Reed was ecstatic about being chosen for this December's U.S. Presidents Cup team.

It’s no secret just how much Patrick Reed enjoys representing the U.S. in team competitions. It’s also no secret that Reed ruffled some feathers when he took a blowtorch to the Ryder Cup leadership a year ago after his team got swamped by the European side.

With that in mind, it’s no surprise just how excited Reed was that Presidents Cup captain Tiger Woods tapped him as one of his final four picks Thursday night. So much so, in fact, that “Captain America” donned Woods’ signature black-hat-red-shirt combo for Friday’s round at the Turkish Airlines Open.

Asked afterward if the outfit was an homage to his captain, Reed gave a sly smile.

“You could say that, for sure,” he said in a video posted by Alex Miceli. “It was awesome news last night hearing from Captain Woods that I was able to get a spot on the team and y’know I can’t wait to get over there and play with the guys and get back in a team format again.”

This is hardly a one-time thing — Reed wears the red and black with some frequency — but the tip of the cap to Woods may suggest that Reed was grateful his captain set aside Reed’s media undressing of captain Jim Furyk after last year’s Ryder Cup. Woods and Reed went 0-2 as partners, which contrasted with the success Reed and previous partner Jordan Spieth had experienced.

Reed, who is 3-1-1 in singles matches across the Presidents Cup and Ryder Cups, finished 12th in the Presidents Cup points standings, but impressed his captain with a win at the Northern Trust Open in August. Since then, he’s continued a solid run of form, finishing in the top 20 in nine of his last 11 starts across European and PGA Tour events. Despite several strong candidates around him, Reed made it sound like the pick was no surprise when asked if he thought the selection was among golf’s “worst-kept secrets.”

“Definitely,” he said. “It’s one of those things that you don’t really feel like there’s as much pressure on you because you already kinda know what’s going on, but then to have to wait and continue playing and everyone asking, it always seemed to be on my mind instead of focusing as much as I needed to on golf.”

@PREEDGOLF talks about getting picked by @TigerWoods and looking forward to playing in the @PresidentsCup in Australia next month. pic.twitter.com/73HMrGDszN

In addition to Reed, the No. 15 player in the world, Woods selected Tony Finau, Gary Woodland and himself to round out the 12-man team. He acknowledged that the first man out was Rickie Fowler, which he said required a “tough phone call” to break the news.

The Presidents Cup will run the week of Dec. 9-15 at Royal Melbourne Golf Club in Melbourne, Australia.