Tiger Woods’s inner self has always been a well-guarded fortress, but on Thursday afternoon he was forced to reveal a few truths in announcing his captain’s picks for the Presidents Cup: 1) Patrick Reed is out of the doghouse, 2) Woods has no empathy for his career-long antagonist Phil Mickelson, 3) Tiger has lost faith in Jordan Spieth, once his heir apparent, 4) The South Florida crew doesn’t roll as deep as we thought. Woods rounded out the American team by picking Reed (12th in the final points standings), Tony Finau (9th), Gary Woodland (10th), and his ownself (13th), becoming the first playing-captain at the Presidents Cup since Hale Irwin in 1994. All are solid, defensible picks of players who have been in good form of late. Now things get really real.

Among the game’s elite players, who are Tiger’s favorite mates? We’ll find out based on whom he pairs himself with at Royal Melbourne, when the competition begins next month. Who does Tiger consider to be the weak links on a heavily-favorited American squad? We’ll know based on the benchings across the first three days of partner play and his singles lineup. All of this had added many layers of intrigue to an event that in recent years has been largely moribund. Heck, the announcement of the captain’s picks had more buzz than a few recent President Cups.

The only anticlimax was Woods choosing himself. After his victory in Japan — a third win in the span of 14 starts, sandwiched around minor knee surgery — there was little doubt that Tiger would get the nod. The commercial considerations demand it, and this ardent hoop fan now gets to play the role of Bill Russell, adding player-coach to a resume’ that already seemed impossibly complete. But another living legend failed to make the cut. Mickelson has been on every U.S. Ryder Cup and Presidents Cup team going back to 1994, an unprecedented streak and a monument to Phil the Thrill’s talent and longevity.

When he won the Crosby Clambake in February, it seemed like Mickelson was a lock to play under Tiger, setting up a delicious dynamic. But over the last nine months, Phil, 49, has been in the most sustained slump of his Hall of Fame career, and in recent weeks had practically begged Capt. Woods not to pick him. Was this a crafty ploy by the one-time psychology major? If so, Tiger didn’t take the bait. He went one step further by not naming Mickelson a vice captain. (Woods did say he could add another assistant at a later date but he didn’t sound very excited about the prospect.) Hmmm, maybe all that yukking Tiger and Phil did around the promotion of “The Match” wasn’t as genuine as we were led to believe. [Eye roll emoji.]

The Reed pick is equally enlightening, in a different way. Woods went out of his way to mentor the misanthropic Masters champ at last year’s Ryder Cup, even as Tiger was visibly gassed from his monumental comeback win the week before at the Tour Championship. But Reed violated the omertà that Woods insists upon from his intimates, telling reporters that Tiger had actually apologized for his ragged play at Le Golf National. Reed burned up more goodwill with his subsequent sniping at Jordan Spieth, his onetime Cup partner, who preferred to play with lifelong best friend Justin Thomas. Who can blame him? Dysfunctional people make bad teammates, as Reed proved. This Presidents Cup selection process, then, was a referendum on Reed, who in August won a FedEx Cup playoff event and has been playing great ever since. Would the one-time Captain America be welcomed back into the team room, or was Reed now truly radioactive among his peers? Woods granted him at least a temporary reprieve. Perhaps the former member of the Ryder Cup Task Force is playing the long-game, knowing a rehabilitated Reed can be an important part of future U.S. efforts. Or maybe this a window into Woods’s insatiable need to win. In explaining the Reed pick, Tiger hailed him as “a person who is as fiery as they come. A great team guy in that you know he’s going to give you absolutely everything he has.” For better and for worse.

As for Spieth, this snubbing puts an exclamation point on how far he has fallen. Even though he had a ragged 2018, he was one of the few Americans to show a pulse at the 2018 Ryder Cup. But the ballstriking woes and disappearing acts on the weekend that have followed were simply impossible for Capt. Woods to ignore. Winless over the last 28 months, Spieth, has now received a brutally honest assessment from Woods, his boyhood hero. The long road back to stardom just became a little more emotionally fraught. 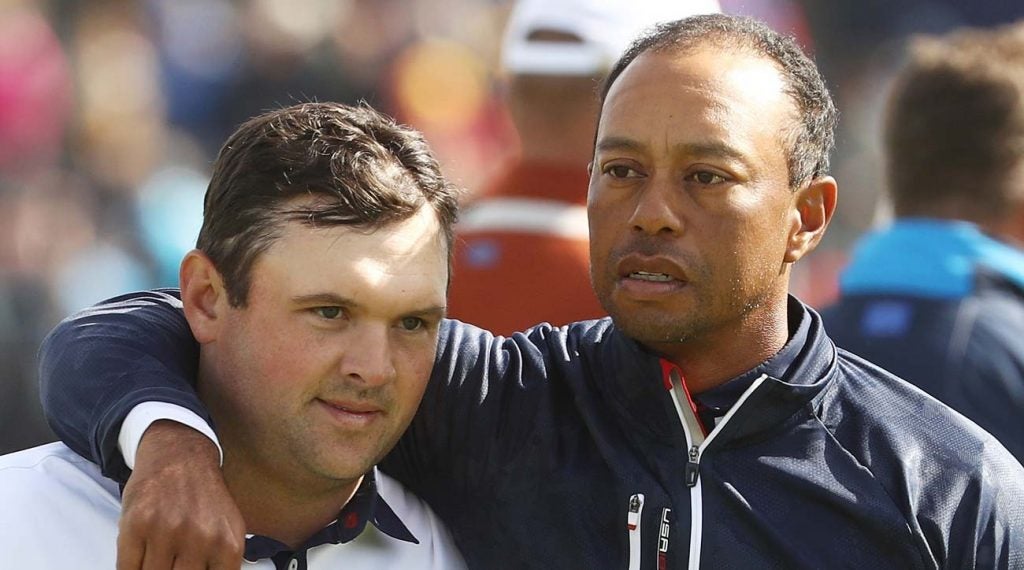 Rickie Fowler’s feeling have to be a little bruised, too, especially since he finished 11th in the points race. He is part of the South Florida golf mafia and during Wood’s various comebacks has always been there to offer Tiger encouragement and a casual game.

“That was a tough phone call,” Woods says. “Rickie’s a good friend of mine.” Alas, not good enough.

So now the powerhouse U.S. team is set, featuring 11 of the top 16 players in the World Ranking. (World No. 1 Brooks Koepka continues to rehab after a late-August stem-cell treatment to repair a partially torn patella tendon in his left knee; Woods demurred on Thursday when asked for a status update and said he has until the day before the competition begins to name a replacement.) “It was a difficult process,” Woods said. That’s over and now the fun begins, an international goodwill exhibition that really serves as an X-ray of Tiger’s soul.