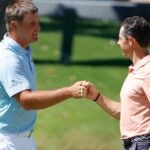 Rory McIlroy knows that to be a professional athlete, you need some thick skin.

“Someone once told me, a while back, ‘If you don’t take anything personally, you’ll live a very happy life.’ And I think I try to do that all the time,” he said on Wednesday, ahead of this week’s Tour Championship.

Easier said than done, of course. McIlroy also recognizes that there’s a fine line that exists between fans and competitors, and in golf that line is very literal — and very thin.

“As golfers, there’s a very thin rope that separates us from the fans, and then you hit a shot off line, and you have to go into the fans to hit it. So we get a little closer to them than some other sports,” McIlroy said.

He also acknowledged that he knew the inspiration behind the question. PGA Tour commissioner Jay Monahan announced on Tuesday that spectators heckling Bryson DeChambeau would face ejection, sparking a debate on what constitutes acceptable fan behavior. The edict marked the latest in a conversation around DeChambeau, who has received more attention — both positive and negative — than any other golfer this summer.

McIlroy has been keenly aware of DeChambeau’s transformation and treatment in recent months. He admitted he was inspired to go distance-chasing after DeChambeau’s 2020 U.S. Open win. He was entertained by the early stages of the Brooks-vs.-Bryson feud. But now, even though he acknowledges DeChambeau is responsible for some of the unwelcome attention, he feels for him.

“I certainly feel some sympathy for him because I certainly don’t think that you should be ostracized or criticized for being different, and I think we have all known from the start that Bryson is different and he is not going to conform to the way people want him to be. He is his own person. He thinks his own thoughts and everyone has a right to do that,” McIlroy said.

“There are certainly things that he has done in the past that have brought some of this stuff on himself. I’m not saying that he’s completely blameless in this. But at the same time, I think he has been getting a pretty rough go of it of late and it’s actually pretty sad to see because he, deep down, I think, is a nice person and all he wants to do is try to be the best golfer he can be. And it just seems like every week something else happens — and I would say it’s pretty tough to be Bryson DeChambeau right now.

“And I don’t know if anyone else on Tour has spoken up for him, but I definitely feel for him a little bit. And I agree, I don’t think he’s completely blameless in all this, but at the same time, I think he’s trying to become better and he’s trying to learn from his mistakes and I think everyone should give him a chance to try to do that.”

McIlroy is, as always, a particularly insightful source for the Tour’s hot-button topics because he thinks about things as a player, fan and analyst all at once. He’s compelled by DeChambeau’s body transformation. He’s entertained by the show popping up around it all. He thinks it may have gone too far. And he knows it’s not going away anytime soon.

As for McIlroy’s own strategy dealing with antagonistic spectators? How exactly does one avoid taking things personally? He explained that it requires prioritizing rational thought over an emotional reaction. He used the Ryder Cup as an example.

“If someone says something to you and you go up and you confront them about it, they’re not going to say the same thing, right? It’s just a weird dynamic between fan and competitor and they’re doing it to try to help their own team. They’re doing it because they’re from the United States … and I think I’ve tried to train myself to think about it and think on purpose rather than react, and I think the more you react to it, the more it gets at you, but the more you actually think about it and break it down and it just, it becomes less meaningful and you can just sort of let it roll off.

“And I’ve tried to do a really good job of that over the last few years of not react and just try to think about it a little bit more and try to just try to put it in a better perspective, I guess.”

McIlroy added that he supports the Tour’s stance that they’ll remove disrespectful fans from the premises.

“There’s no room in golf for people to abuse someone on the golf course when all they’re trying to do is do their best and win a golf tournament and follow their dreams,” he said. “There’s no place for that in our game. And that might sound a little stiff or snobby or whatever, but that’s golf and we have traditions and if you look at like, the First Tee Program, for example, what are they taught through golf? They’re taught respect, sportsmanship, etiquette, how to treat others the right way, and that’s everything that we try to do through golf.

“They are the values of our game, and people need to understand that and they need to try to adopt those same etiquettes and those same beliefs and values when they show up at our tournaments.”