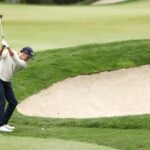 Patrick Cantlay closed the Zozo Championship with a final-round 67.

Justin Thomas held the 54-hole lead at the Zozo Championship at 19 under, but Jon Rahm (18 under), Lanto Griffin (17 under) and Patrick Cantlay (16 under) were close behind heading into the final day. Here’s how it all went down at Sherwood Country Club on Sunday.

How it happened: Thomas and Rahm made the turn tied for the lead at 22 under, two clear of Cantlay and a larger group at 18 under. Rahm took the lead at 23 under when he birdied the par-5 11th by getting up and down from the green-side bunker, but he went bogey-bogey on the next two. And while Thomas started the back nine with five straight pars, Cantlay, in the group ahead, was pulling away. He birdied 13, 14 and 15 to get to 24 under and led Thomas by two. Cantlay gave a stroke away when he made a mistake with his wedge and bogeyed the 16th, but after Thomas bogeyed 15 the lead was back to two. Rahm cut the lead to one with a birdie on 16 and needed to birdie one of the final two holes to tie Cantlay, but he missed both putts from inside 20 feet. Rahm closed with a 68, and Thomas birdied the last to shoot 69. They tied for second, one shot behind Cantlay.

Biggest shot: Cantlay was putting all the pressure on Thomas and Rahm in the group behind him. He tied the lead when he birdied the 13th and took the solo lead on the 14th. Then, on the 176-yard par-3 15th, he nearly hopped his tee shot into the hole. He rolled in his putt from 10 feet to get to 24 under and grab a two-stroke lead.

Why it matters: It’s the third career PGA Tour victory for Cantlay and the first since he won the 2019 Memorial. The 28 year old was already one of the top-10 betting favorites for the Masters, and now he’ll have even more eyes on him. He’s had two top 10s in majors, and was T9 at Augusta National last year.

Tiger’s return: Playing on Tour for the first time in a month following his missed cut at the U.S. Open, Tiger Woods, the defending Zozo champion, closed with a two-over 74 on Sunday (which was four better than one of his playing partners, Phil Mickelson). Woods hasn’t ruled out playing the Houston Open in two weeks, otherwise his next start will be his Masters defense the week after.

Up next: The Bermuda Championship at Port Royal Golf Course in Southampton, Bermuda, begins on Thursday.