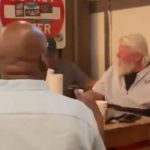 Charles Barkley, basketball Hall of Famer, NBA analyst and much-critiqued golfer, was following John Daly during last week’s Regions Tradition when a social media producer with the Champions Tour caught up to him. Barkley had played in the pro-am, his revamped swing was the darling of Twitter, and he gave the standard, somewhat vanilla quote about his week.

The producer then asked about Daly.

“JD’s great, man,” Barkley said. “He hasn’t changed. And he picked up the check at dinner last night.”

One night during the tournament, they did more than eat.

When you’ve finally cured that hitch in your swing, when you’re sitting around a table with Daly and a dozen or so other friends, when one of the friends has a guitar, you have to.

“One more time, Chuck!” someone yelled in the background of the video shared earlier this week by Golfers Doing Things.

And Barkley joined Daly in singing Can’t You See by the Marshall Tucker Band.

“Can’t you see? What that woman … is doing to me?” Barkley and Daly sang.

Someone in the background called for a big finish.

Someone in the background called for Barkley to finish the line.

“Is doing to me,” he sings softly.

Before the week, nearly everyone had laughed at Barkley’s swing. Now, folks were laughing only with his singing.

How’d Barkley start to enjoy himself off and on the course? In nearly every other video that was taken at the pro-am, Barkley both swung more fluidly and quickly credited instructor Stan Utley. (“Stan Utley got me fixed, man,” he said in one video.) When reached by GOLF.com, Utley said all he did was help clear up a muddle in Barkley’s fundamentals that prevented him from properly loading and unloading the club.

Enough so to take his show on the road.