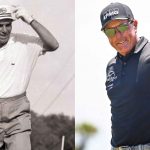 History awaits Phil Mickelson in the final round of the 103rd PGA Championship.

Through 54 holes, he is one stroke clear of Brooks Koepka at the Ocean Course on Kiawah Island. If Mickelson can hang on and win Sunday, he would become not only a six-time major champion (joining Nick Faldo and Lee Trevino) but, at 50 years 11 months and 3 days old, also the oldest-ever winner of a major championship.

It’s a record Mickelson would break comfortably. No 50-year-old has won a major. No 49-year-old, either. The oldest major champion is Julius Boros, who was 48 when he won the 1968 PGA Championship at Pecan Valley GC, in San Antonio, Texas.

“The guy’s got four good rounds in him on any golf course, and no one would bet against that,” Spieth said on Friday. “And what he did in the wind, last two days, with his accuracy struggles, to carve it into these fairways? And to be gaining strokes on the field and to shoot those scores in the conditions we’ve had? That’s pretty awesome.”

For your trivial pleasure, here are the 10 oldest major winners that Mickelson is aiming to eclipse:

Fifty may not be what it used to be — not with supercharged modern equipment and an emphasis on fitness that was not in play a generation ago — but still, give Mickelson his due. Beating players half your age on the longest major venue in history would be nothing short of an achievement, well, for the ages.