Oh, what a season! The four major championships of 2017, ranked 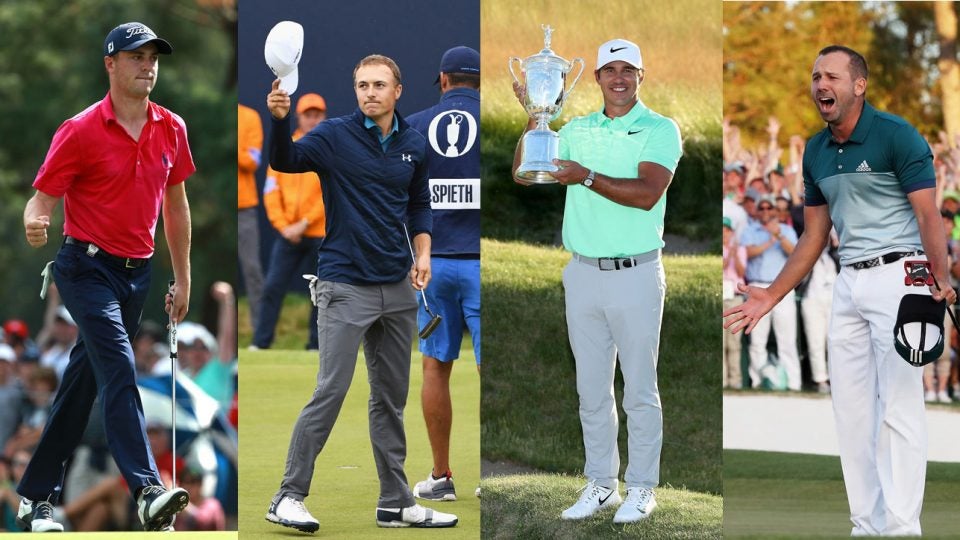 CHARLOTTE – Whew! That was fun, wasn’t it? Justin Thomas’ win was a worthy final act for an unforgettable season of major championships. What better time to look back at them than now? Here now is one man’s ranking of the ’17 majors.

​
Erin Hills was a heaving, lumpy landscape of unknowns, and while the first-time major venue added layers of intrigue and looked spectacular on television, the players absolutely shredded it during a calm and clear weather week. In the third round, Justin Thomas shot the fifth 63 in U.S. Open history, and at nine under it was the lowest round in relation to par. That round punctuated an exhilarating Saturday, the most exciting third round at a major this season. But on Sunday Brooks Koepka poured in three straight birdies early on the back nine to drain the drama and pull away from a pack that included Tommy Fleetwood, Hideki Matsuyama and third-round leader Brian Harman. Koepka simply overpowered the course, and when it was over he posted 16 under par, matching Rory McIlroy’s total from 2011 for lowest total score ever at an Open. “What I’ve done this week is amazing,” Koepka said. No argument here.

​
The revamped Quail Hollow Club, with three new holes and fresh Bermuda grass, showed more teeth than many expected, and players struggled with the snarly rough and slick greens. The course played tougher than Erin Hills, which no one could’ve predicted before June. Pre-tournament co-favorites Rory McIlroy and Jordan Spieth never factored at Quail, wiping out some of early-round buzz. (Heat and humidity also took a toll.) But Sunday was a thrill ride as a pack of players seeking their first career major jockeyed up and down the leaderboard. At one point, five players were tied for the lead on the back nine. Justin Thomas hit a birdie putt on the 10th hole that hung on the lip for 10 seconds (at least!) before dropping, then chipped in for birdie on 13 to seize a lead he never relinquished. On the final green, Rickie Fowler and Jordan Spieth were there to congratulate their buddy, the 24-year-old champion whose father and grandfather are PGA profressionals. “For this to be my first one and have my dad here, and I know grandpa was watching at home. I was able to talk to him and that was pretty cool. It’s just a great win for the family, and it’s a moment we’ll never forget,” Thomas said.

READ: Thomas breaks out of pack to win PGA, by Michael Bamberger

​
Ser-gee-o! The season’s first major always lives up to the hype, and this year it came down to a head-to-head duel in Sunday’s final pairing between Garcia and Justin Rose. As he stood deep in the pines left of the 13th fairway, the Spaniard trailed Rose by one and his chances appeared to be fading. After taking a drop and moving a few pine needles around his ball, video replays showed that his ball may have moved … or did it? Augusta’s ruling bodies quickly said no foul was committed, and Garcia escaped with a par that his countryman Seve Ballesteros would’ve applauded. After a career that had been largely defined by his major-championship collapses (and zero wins in 72 major starts), Garcia dug deep and took down Rose with a birdie on the first playoff hole. And adding to the emotions of the moment, Garcia won on what would’ve been Seve’s 60th birthday. “It definitely popped in my mind a few times,” Garcia said. “I’m sure he helped a little bit with some of those shots or some of those putts.”

​
Venerable old Royal Birkdale was perfect. The finish was even better. Spieth’s 30-minute odyssey on the 13th hole in the final round will live forever, but there were many other memorable moments from that week, none more historically significant than Branden Grace shooting a 62 on a calm Saturday afternoon to crack golf’s version of the four-minute mile and set a new major-championship scoring record. That was the appetizer to Sunday’s showdown between Spieth and Matt Kuchar, where Spieth rallied from a poor start and a bogey on that epic 13th to play the final five holes in five under to clip Kooch by three.

While photos of Spieth dropping in the driving range will be splashed in golf’s history books, the image of Spieth clutching the claret jug on the 18th while a misty-eyed Kuchar checks out the engraving is perhaps the most powerful photo of the season. Said Spieth, in that post-round ceremony: “What a great champion Matt Kuchar is, and what a class act. I took about 20 minutes to play one of my shots today, and Matt took it in stride, smiled and there’s not many people who would have done that. And it speaks to the man you are, and you set a great example for all of us.”

Spieth completing the third leg of his career grand slam also adds juice to every PGA Championship he enters from here on. This Open was historic. It was fascinating. It was thrilling. It was the best major of the year.