Tiger owes us nothing, but there was also nothing memorable about his week at Bethpage 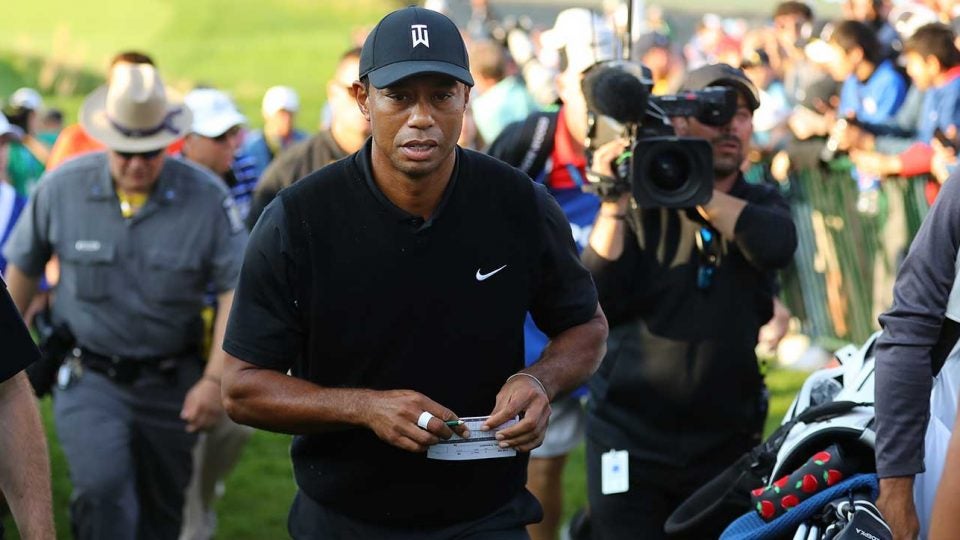 FARMINGDALE, N.Y. — Tiger Woods owes us nothing. He has already given so much. If he wants to snub Quail Hollow so he can bask in the afterglow of his Masters win a bit longer, he deserves that. If Woods feels it’s prudent to blow off practicing the day before the PGA Championship begins to marshal his energy, who are we to object? And yet, it’s impossible not to feel a little let down by Tiger’s lethargic play at the PGA Championship. On Friday he made six agonizing bogeys en route to a three-over 73. It marks the first missed cut of this final act of his career.

Afterward, Woods refused to second-guess his minimal preparation. Pressed on the point, he said, “You know, I’m the Masters champion and 43 years old and that’s a pretty good accomplishment.”

Indeed, that victory completed maybe the greatest comeback in sports history. Whatever Woods does going forward will be a bonus, and this lackluster performance at the PGA Championship should lead to a healthy recalibrating of expectations. And yet, the man himself had said on the eve of the PGA, “It’s great to be part of the narrative.” Again. He came to Bethpage — site of his overpowering U.S. Open victory in 2002 — as the only man on the planet in pursuit of the Grand Slam. It was a fanciful notion, but Woods has once again exploded our notion of what’s possible in this game.

His sloppy first-round 72 — a couple of three-putts and errant chips, plus a few greens airmailed from the middle of the fairway — could be chocked up to rust. It left him precariously close to the cut line and visible exasperated. This is a borderline obsessive who has bragged about getting clothes back from the dry cleaner and re-ironing it himself, just because. It was revealing when Woods said his first round “wasn’t as clean as I’d like to have it for sure.” There was every expectation he would follow with a tidy performance but that lasted exactly one swing, when Tiger sniped his opening tee shot far to the left, scattering the crowd. In the awkward silence that followed, a Noo Yawk voice pierced the silence: “Fire up the yacht!” The doomsday scenario of Tiger missing the cut was already on everyone’s mind.

Woods scrambled to a deft par but the squirreliness was just beginning. Bethpage Black’s second hole is a short par-4 that bends sharply to the left. With an iron in his hand off the tee Tiger hung his drive out to the right and it settled one yard into the rough, into a patch of grass as thick as Bubba Watson’s chest hair. Woods capitulated, punching out to the fairway, and then from 90 yards he lost control of the spin on his wedge, landing the ball near the flag but having it rip backward to 20 feet. He missed the putt. When Brooks Koepka made his second straight birdie Woods was suddenly a dozen strokes back.

Tiger got one back on No. 6, draining a 17-footer for birdie, but the next hole called for a fade off the tee but instead he uncorked a hard draw that went through the fairway, into another nasty lie in the rough. Woods slashed out to the fairway but again he couldn’t get up-and-down to save par, missing a 6-footer on the low-side. A 40-foot bomb on the 9th brought a rueful smile from Woods but bogeys on 10 and 11 followed a dispiritingly familiar pattern: blow a drive into the rough, slash out, wedge on, miss a makable par putt.

Nothing was working for Tiger on this day but he’s never going to stop fighting. After driving into the fairway bunker on the par-5 13th hole he played two careful shots and made an 8-footer for birdie. That sent him back inside the cut line, but only for a minute. On the par-3 14th he came up a club short, smashed a long uphill birdie putt 12 feet past the hole then missed the comebacker. “You know, unfortunately I just made too many mistakes and just didn’t do the little things I need to do,” he said. “I had a couple three-putts. I didn’t hit wedges close. I didn’t hit any fairways today. Did a lot of little things wrong.”

The last four holes were a joyless trudge back to the clubhouse, with Tiger looking increasingly diminished as he failed to give himself any good birdie opportunities. On the eve of the tournament, he had said, “There’s definitely going to be a component to stamina as the week goes on. Four days over a tough championship that is mentally and physically taxing takes its toll.” Following the first round, Woods revealed that he was being slowed by an illness about which he declined to offer details. This uninspired spin around Bethpage will not be remembered as his Flu Game.