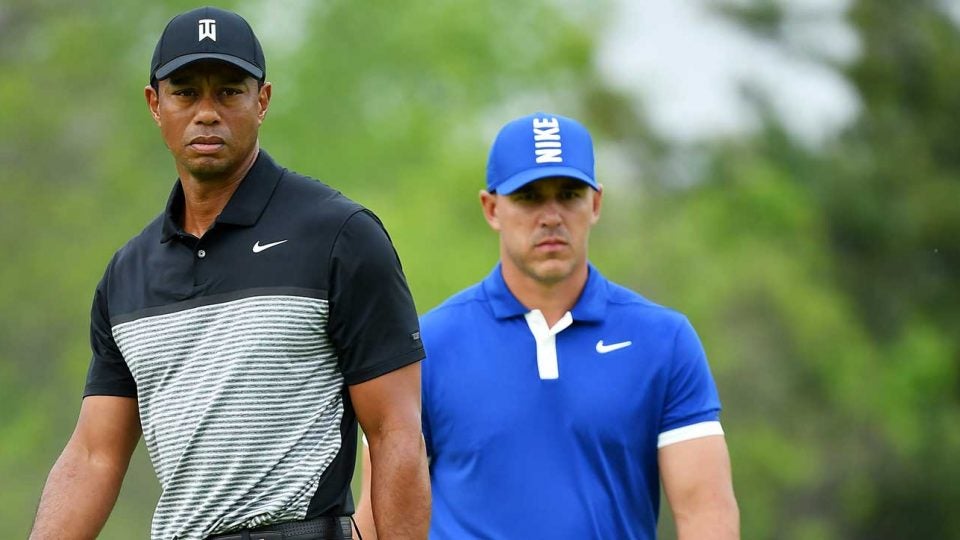 FARMINGDALE, N.Y. — One of the loudest roars the boisterous Bethpage Black crowds mustered on Friday afternoon came on the 9th hole, nearly the furthest point from the clubhouse. Fans don’t often venture beyond the opening and closing stretches of this sprawling layout, but for Tiger Woods — and a little bit for tournament leader Brooks Koepka, too — they make exceptions.

On No. 9, Woods finally hit a fairway, his first of the day. He hit a proper iron shot, too, though it flew directly over the flag. Then he poured in the birdie putt, all 39 feet of it. The fans ringed four and five and six deep around the green erupted. Chants rang out. “Tiger! Tiger! Tiger!” and they didn’t stop. Koepka, who still had to putt, killed some time marking and replacing his ball, and then he missed his own birdie putt. The cheers chased the group to the next tee.

Most urged on Woods. A few audibly rooted against Koepka. (“There was some guy yelling, ‘Shank it!’ all the way up 18,” Koepka said after his round.) The scene gave the impression that Woods and Koepka were locked in a dogfight, trading haymakers. It was also a reminder of the chasm between the two in the eyes of golf fans, the beloved legend of the last two decades and the standoffish world-beater of today. But forget the history, forget the major count, forget the result of the 2019 Masters: This week, Woods and Koepka were playing different games.

There was a second, more telling scene at 18. Woods, needing birdie to make the cut, found the fairway but missed the green with a wedge. Koepka, who needed only to make it to the clubhouse without some freak injury, found the right fescue but somehow hacked a wedge to inside 10 feet. Koepka made birdie, moving to 12 under, seven shots ahead of his chasers. Woods grinded out his meaningless par, posting five over, one shot shy of the cutline.

The more Koepka dominates, the more the Woods comparisons come. On Friday, though, it was the differences between the two players that stood out — but maybe that’s the point. After the round, Woods said about Koepka the sorts of things that other great players used to say about Woods. “What Brooksie did, he’s driving it 330 yards in the middle of the fairway. He’s got 9-irons when most of us are hitting 5-irons, 4-irons — and he’s putting well.”

The base similarities between he and Woods are clear: Koepka is a strong, athletic golfer lapping fields and contending in every major. He can dial up what looks like a conservative strategy when it’s really just a higher level of golf, a better way of playing the course. If Koepka finishes what he’s started this week, if he puts a bow on his fourth major, there are only so many other players in the modern era you can compare him to, anyway.

Koepka isn’t like Woods. He was neither a teen phenom nor bred for superstardom. But perhaps their most striking differences come from the ways the two have presented themselves to the public. Even during the peak of his powers, Woods never had a 100 percent approval rating, but nobody ever questioned his drive: for competing, playing and winning. Part of why Woods made golf cool was because he made it okay to try and to care. Over the years, Woods has said a lot of things that it’s hard to picture Koepka saying. A selection:

“I get to play golf for a living. What more can you ask for – getting paid for doing what you love?”

“One of the things that my parents have taught me is never listen to other people’s expectations. You should live your own life and live up to your own expectations, and those are the only things I really care about.”

Woods has also talked in his career about his on-course focus. It’s easy to try hard for four or five hours, he has said. The rest of the day, you can do whatever you want. All of the above represents a contrast to Koepka’s quotes from earlier this week, and to others he’s spouted through the years:

From the same interview: “It gets boring from like hole 5 to 12. You are just like, Where am I right now? I literally can’t tell you what happened during those holes. You kind of like black out. Everything is repetitive.”

From a 2015 interview with Golf Digest: “To be honest, I’m not a big golf nerd. Golf is kind of boring, not much action. I come from a baseball family.”

Koepka has made it clear with his comments: He’s not some golf try-hard. He doesn’t much care what people think. He’s bored by the whole thing.

But what remains less clear is whether Koepka really means any of that, whether he is truly the golf-hater he claims to be. In less guarded moments, he has offered contradictory accounts. We know he’s fueled by what other people think (see Chamblee, Brandel). To follow him, to see him plotting his way around the course, is to realize how focused he really is. To see and hear how much he wants to beat Woods shows us that he cares.

Koepka spoke to that focus after his round Friday. When he and Woods first played together in 2013, Koepka said he couldn’t stop staring — and then he learned something from it.

“All I did was watch him for nine holes. That’s what I grew up doing. I grew up watching him on TV, and I spent the first nine holes, all I did was pay attention to every move he made. You know, whether he was just picking up his tee, whatever it was. And you can’t do that. You’ve got to focus on your own game.”

Koepka doesn’t do that any more. When the two are in the same group, there’s no real back-and-forth. “I know when we’re both playing, we’re both focused on what we’re doing. There’s not much chatter going on,” Koepka said.

One of the biggest questions that remains about the game’s new superstar is this: What is Koepka’s relationship with the game of golf? And how does it differ from that of Woods? If Koepka can answer that, and do so honestly, the golf world would better understand what, exactly, to make of him.

But this week, Woods is being asked about Koepka, when it’s typically been the other way around. That’s worth something.