Last week I wrote about the pleasures of playing in a four-club event. That short commentary elicited this interesting note from reader Michael Sullivan: “I read your article where you talked about the four-club format. I think it would be crazy interesting to see Tour pros manufacturing and improvising shots with only four clubs to choose from. In fact, I think the Tiger vs. Phil event would actually be worth watching if it was played with only four clubs. I think it would be an advantage for Tiger, as Phil would probably forsake his extreme lob wedges. But who knows?” Exactly! You have to make a whole series of decisions before you get to the first tee, and then on the course all bets are off. I’m with Mr. Sullivan. If Phil and Tiger each had four clubs at their Thanksgiving pay-per-view thing, I’d pay to view.

6. THE PATH NOT TAKEN

Can you identify a moment in your personal golf history where everything changed? I caddied in my first PGA Tour event in May 1979, at the Kemper Open, for a player named Randy Erskine from Battle Creek, Mich. The week with him opened my eyes and shaped the rest of my life. The other day, I received an email from a guy who was also in the running to caddie for Randy Erksine that same week. Had Sam Rogers been on Randy’s bag that week, instead of I, my life would not be the same. I know all the things that came out of that week. The rest of my life, for one thing.

I’ll be eager to see what Cameron Champ does this week at the Tour stop in Las Vegas, and beyond. As Tiger Woods has the perfect nickname for an athlete, this kid — he’s 23 — has the perfect athlete’s surname. His win last week at the Tour stop in Jackson, Miss., was a thrill-ride, with a backup driver in the finale, a squandered lead followed by clutch putting deep into the afternoon. Also, in victory, one of the best smiles you’ve ever seen. Look at him hoisting the bronze rooster trophy gifted to the winner of the Sanderson Farms event. Champ’s swing speed is astonishing. His life story is unique. (He had a black grandfather who didn’t let the segregated golf in Texas in the 1950s keep him from the game he loved.) Like Jordan Spieth before him, Champ has been a winner at every level at which he has played: junior, college, Web.com, now the PGA Tour. Thirty years from now, maybe he’ll win on the Champions Tour. In the meanwhile, let’s see how he does as another of the game’s thrill-a-minute twentysomethings.

4. THE MOST INTERESTING FORMER AGENT IN GOLF

The coveted title of The Most Interesting Former Agent in Golf belongs, in my opinion, to Mac Barnhardt. Mac, recently pushed out in a Steve Loy (Phil’s guy) power-play at Lagardere, is on the sidelines for now, because of a no-compete clause. But I saw him for a long breakfast the other day, and I look forward to his future. Barnhardt has insight into a thousand different subjects, on golf and off, and I feel sorry for anybody who would bet against this guy’s next chapter. 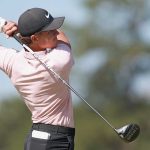 St. Andrews is called the home of golf. If it were not for all the public courses there, it would not have that name. I was recently at Indian Springs, a no-thrills public course in the Florida Panhandle that was turned upside-down by Hurricane Michael. I’ll be writing about the visit pretty soon here, but I left Marianna reminded that Indian Springs, and hundreds of places like it, are the true backbone of American golf.

The LPGA’s Q-School is now a 144-hole grindfest. That’s a lot of golf. But it will serve its ultimate purpose, which is to see who is most deserving of a LPGA tour card. It brings to mind something I think about from time to time. Tiger Woods’s 80 Tour wins, 14 of them majors titles, all of them 72-hole stroke-play events, although some were settled of course in playoffs. But imagine if the standard length of an event was 90 holes instead of 72, then what would his record be? Give a talented person more opportunity to prove his or her talent, and the answer is predictable. I asked Jim Furyk the how-many-more question above and he said, “I don’t know, but it wouldn’t be less.”

1. MERION: ONCE MORE, WITH FEELING

The worst-keep secret in Far Hills, N.J., is the very likely venue for the 2030 U.S. Open: the Merion Golf Club. The blazers there love the restoration work Gil Hanse (a club member) is doing and has done there. (The course has been closed for almost a year.) The 2030 Open will mark the 100th anniversary of Bobby Jones winning the Grand Slam, which he did by winning the British Amateur, the British Open, the U.S. Open and the U.S. Amateur at Merion. I only hope that in 2030, the USGA will allow the golfers to really play the course as it was intended to be played, which was not the case in 2013, with crazy-narrow fairways and a cumbersome start. ALL play should begin on the first tee, the players should use the member parking lot and the clubhouse and the member driving range. If the field has to be smaller, or ticket sales limited, to make that possible, it should be done. As John Lennon once wrote, You may say I’m a dreamer/but I’m not the only one. The goal is to let the world see Merion. Let the people see Merion.

As for Lennon, need him now more than ever.