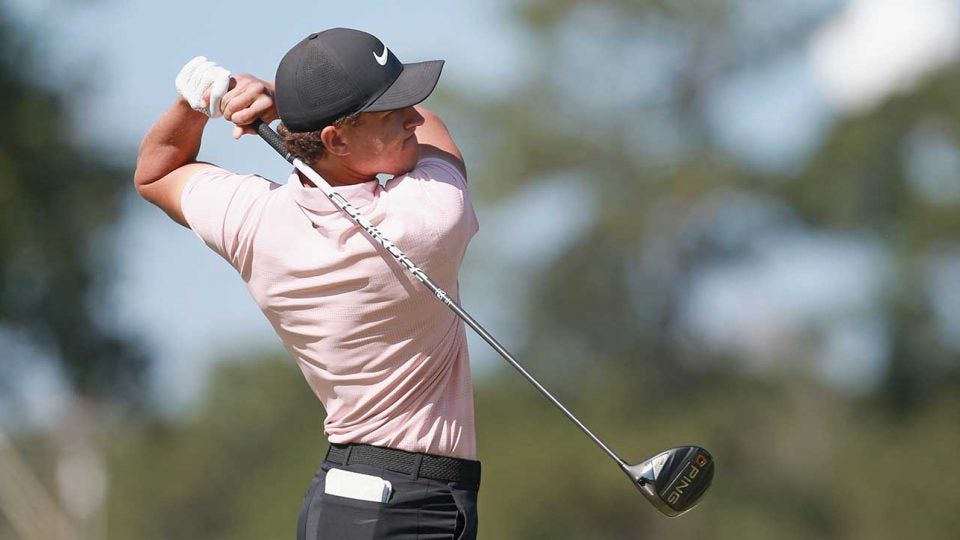 It only took Cameron Champ nine PGA Tour starts — two as an official PGA Tour player — to capture his first win. There was a lot to be impressed with, like his five birdies in his last six holes, but one thing that stood out above all else were his driving stats.

Champ averaged 334 yards off the tee during the Sanderson Farms Championship, ranking him second overall in Strokes Gained: Driving, and bringing his early season averages to absurd — borderline unprecedented — levels:

Champ is a product of Sean Foley’s stable who once likened the former Texas A&M player to Usain Bolt: “I’d never seen speed like this,” he said. “We’re basically looking at Usain Bolt.” So, how does he do it?

Champ’s power looks, in many ways, effortless. Smooth would perhaps be the better word, and it’s credit to the move at the top of his backswing.

As you can see on the left frame: Champ generates such speed out of his frame because he creates a high, wide arc with his arms at the top of his backswing. This full turn also allows him the space to shallow the club as he drives down toward the ball. How does shallowing the club like this create speed? Because it means he can re-hinge the club on the downswing — or create “lag.” Here’s that same move from a different camera angle. You can see his wrist angle tighten; rather than releasing or maintaining his lag as he starts the downswing, Champ is still creating lag even halfway through his downswing. It’s an incredible amount of leverage generated that he’ll soon release into the ball. After spending the first two-thirds of his golf swing creating the conditions for high swing speed, the impact zone is Champ’s time to release it. Champ’s lower body clears, his upper body tilts, and he releases his wrists into the ball. One thing you’ll notice, though, is how far his hands are ahead of the ball, even on a swing with a three-wood he’s hitting below. Indeed, if you look at Champ’s Trackman numbers, you’ll notice he’s swinging down on the ball even when he hits a driver.

That forward shaft lean is something we saw in Tiger Woods’s swing when he was working with Foley en-route to his five-win 2013 season. Champ’s negative attack angle de-lofts the club and compresses the ball incredibly well. It’s why his launch angle is lower than usual (hovering around nine degrees), but his ball speed is still so fast (often touching the mid 190s). The result of all this? An immensely powerful golf swing with a blazing fast swing speed, bullet-ball trajectory, all while maintaining a smooth look —and a PGA Tour victory to cap it off.