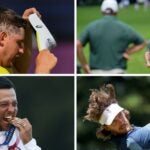 The men's Olympic competition was a rousing success.

It was just shy of 5 a.m. Eastern Time when the final putt of the men’s Olympic golf competition fell in the center of the hole, so we’d hardly blame you if you weren’t awake to see it.

What happened in the men’s Olympic golf tournament? Let’s use this week’s Monday Finish to start from the beginning and get you all caught up.

(While you’re at it, check out the podcast below for on-the-ground analysis from the final round!)

THE OLYMPIANS WHO WEREN’T

The Olympics began with all the attention on the golfers who weren’t going to be attending this year’s Games — a list that unexpectedly grew as the week went on.

Of the top 20 players in the world, 13 missed the Olympics. Dustin Johnson, Louis Oosthuizen and Tyrrell Hatton declined to make the trip to Tokyo. Brooks Koepka and Patrick Cantlay declined to be added as first alternate to Team USA’s roster. Because a maximum of four players are allowed per country — and only two unless that country has four inside the world’s top 15 — a crop of top-20 Americans including Jordan Spieth, Harris English, Webb Simpson, Daniel Berger, Scottie Scheffler and Tony Finau weren’t eligible to compete.

Then Jon Rahm and Bryson DeChambeau each tested positive for Covid-19 before departing for Tokyo, complicating matters. Rahm’s positive test was particularly strange because of his high-profile Covid case in June at the Memorial, where he went into quarantine with a six-shot final-round lead. He was replaced by Jorge Campillo. DeChambeau’s replacement, Patrick Reed, headed directly from the 3M Open to Tokyo and made his Olympic return without a practice round.

Once we got collectively over those golfers not in attendance, it was time to focus on those who were.

Collin Morikawa arrived as the betting favorite, listed at 7-1 odds coming off his Open Championship win. Justin Thomas, Xander Schauffele, Viktor Hovland, Rory McIlroy and Hideki Matsuyama filled in the list of favorites behind him, each coming in between 9-1 and 13-1.

There were intriguing storylines surrounding players and their countries, too. Could Matsuyama, proud owner of a 2021 Green Jacket, also win a medal in his home Olympics? Could Schauffele, perennial runner-up, get the job done with his near-Olympian father proudly looking on? Could Si Woo Kim or Sungjae Im earn an exemption from South Korea’s compulsory military service by winning a medal? How would Rory Sabbatini play representing his new home country of Slovakia? How would McIlroy fare now that he’d chosen to represent Ireland?

Before Reed even arrived, we’d already found plenty of little things on which to focus our attention.

Sean Zak, our boots on the ground in Tokyo, brought news of Tommy Fleetwood testing out a visor.

The golf course was immaculate; nobody had played Kasumigaseki Country Club since May, so even the players were blown away by the carpet-smooth greens.

McIlroy reminded us that his head is too small for most hats, so when he’s not wearing a custom Nike lid he likes to let the moss breathe:

For those who obsess over wristwear, McIlroy had also ditched his typical Whoop strap for an Omega watch, something called the Seamaster Aqua Terra “Ultra Light,” even during play — perhaps inspired by Omega’s large sponsorship in the Games.

But it was Cameron Smith and his Aussie partner-in-crime Marc Leishman who truly stole the show. Smith’s mullet has grown in length and legend these last few months and he’d enhanced the effect by cutting “AUS” into the sides. We also found out that Smith’s barber in Jacksonville is named “Lee Trevino.” Smith felt the admiration everywhere, and rightly so:

The effect of the mullet was particularly enhanced by the Aussie gear, which had a real “assistant coach for an obscure college sport” vibe.

Early on, the course was open for scoring. Sepp Straka opened with an eight-under 63 to grab the first-round lead. Jazz Janewattananond was just a shot behind. The large majority of the 60-player field found their way into red numbers. Golf Channel’s announcers ran out of ways to describe made putts. Paul Azinger was literally speechless.

The effect of the time change in Tokyo was only further complicated by a series of rain delays, which led to a bunch of milling about and some fun observations from Zak, who found his way to the clubhouse.

Schauffele surged into the lead with three birdies to finish out his second round, one shot ahead of Carlos Ortiz, who said his boxer roommate had inspired him to strong play. But Kasumigaseki’s plentiful birdie yields suggested that plenty of players could charge from the pack.

Through three rounds, what had mostly become clear was that not much was clear. Twenty-seven players were within five shots of the bronze medal position. Schauffele held the lead, Matsuyama was just a shot back and Paul Casey joined them in the final group, setting up an unforgettable finale.

Schauffele quickly widened his lead with birdies at 1, 3 and 6.

Behind him, a peloton of medal contenders began to crystallize. Some stumbled in the moment, most notably Ortiz, who slipped from contention when he played the final six holes in seven over par for a Sunday 78. But plenty others made buckets of birdies.

Sabbatini was chief among them; he began the day seven groups back but birdied 1, 2 and 5, holed out for eagle on the par-4 sixth and added another birdie at 8 to officially enter the mix.

He wound up shooting a preposterous 10-under 61 that included two bogeys, an eagle, 10 birdies and just five pars to grab the clubhouse lead at 17 under. Suddenly Schauffele had a number to beat.

Others had a chance to post 16 under, but none could manage it. Five players — including McIlroy, whose birdie try at 18 just dodged the hole — posted 15 under and waited for the final group to come in. Casey’s bid for the bronze sailed past the cup, leading to a nervy six-footer coming back. Matsuyama had the final chance to post 16, but he borrowed just a fraction too much break. When he tapped in for par at 18, it ensured a seven-man playoff.

Schauffele, meanwhile, was scrambling. After a macho front-nine four-under 32, he stalled out a bit, battling a stiff neck and the pressure of closing out a gold medal. At 14 he blocked his tee shot into the right trees and was lucky just to escape with bogey, falling into a tie with Sabbatini. Matsuyama was a contender for gold, too, until he missed short putts at 15 and 17. But the top spot on the podium came down to Schauffele’s execution.

“I thought I had a one-shot lead going into 16 or 17 and I looked at the board and I saw Rory shot 61, so that was a nice wake-up call for me, thank goodness there was a board there or I wouldn’t have known,” he said.

At No. 17, he drove it into the greenside bunker, splashed it to eight feet and made the putt to retake the lead by a single shot. But at 18, he blew his tee shot way right, punched down the fairway and was faced with an up-and-down from 100 yards to win.

He stuck his approach shot to four feet, the sort of distance that would terrify the average golfer. Schauffele felt his mind racing, too.

“So I was just thinking about, ‘What if I make this putt?’ and all these things and I tipped my head down, I closed my eyes and I just tried to really become more present and just focus on the 4-footer,” he said afterwards. “Once again I just reminded myself, this is just a 4-footer, all you have to do is make it, no big deal.”

All that remained was filling out the podium. Sabbatini had secured silver, but the seven-way showdown for bronze commenced at the 18th tee.

Five golfers advanced through the first elimination hole with pars; Casey and Matsuyama were eliminated after a sloppy drive and a pulled wedge, respectively, led to bogeys.

All five moved on with pars at the par-3 10th, with Mito Pereira coming the closest to ending the competition

At No. 11, Morikawa nearly jarred his approach and left himself with a kick-in birdie. C.T. Pan followed with a wedge inside three feet. McIlroy and Pereira hit wedges close, too, but suffered devastating lip-outs. Two players moved on.

And then Morikawa’s chances were undone by an unlikely source: A mis-hit iron shot. His approach at No. 18, the fourth playoff hole, plugged in the face of the front bunker, dooming him to bogey. When Pan poured in his par putt, the final spot on the podium — and a six-figure check from the Chinese Taipei Olympic Committee — was his.

Plenty of people, this author included, have groused about the Olympic format and the lack of a team competition. I stand by my suggestions for improvement, but I’m also more than happy to acknowledge that the conclusion to this event was terrific and memorable and produced a worthy champion. Big-picture, golf in the Olympics makes plenty of sense, and the golfers involved raved about the experience, too. Their testimony:

“I wish I was leaving here with a medal but it’s been a brilliant week,” said McIlroy, initially an Olympic skeptic. “I’ve really enjoyed spending so much time with Shane [Lowry] and all the guys and it’s just been a throw back to the good old days when we didn’t play for money. It was great.”

McIlroy has his eyes already set on Paris, as does Justin Thomas, who was disappointed to finish T22 but thrilled to be on the team.

And Casey summed things up succinctly:

“The golfers that passed on it, I’ve got no words for them — all I would say is that I think representing your country is the greatest thing can you do.”

Many of the best male golfers have trekked to Memphis in the meantime, and while a WGC can seem like a letdown after the pomp and circumstance of Olympic gold, almost all your favorites will be in attendance — including the newly-minted gold medalist. Brooks Koepka leads the favorites at 12-1.

3. The greatest shank of all time.