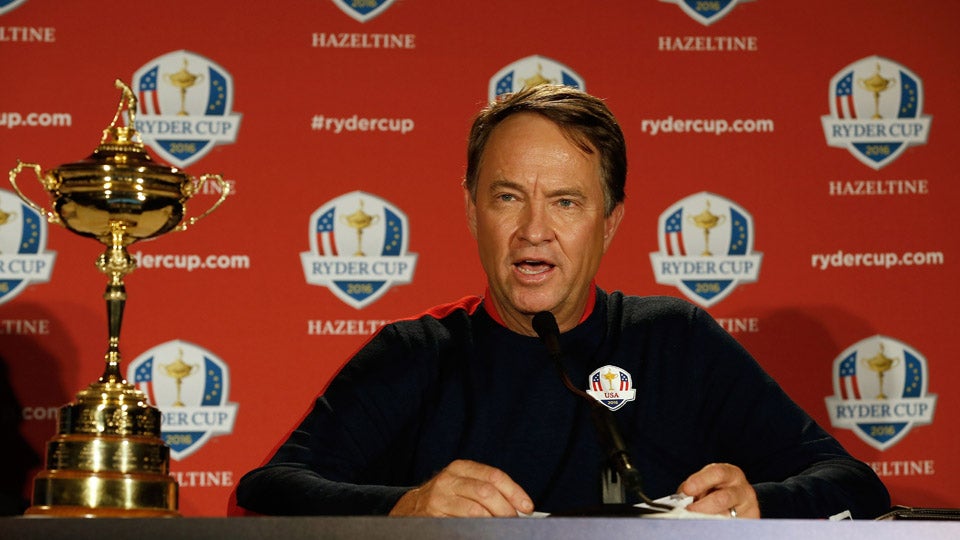 Davis Love leads Team USA into Hazeltine with high hopes to atone for the 2012 defeat at Medinah.
Getty Images

After much speculation, discussion and debate, the U.S. Ryder Cup roster is fully complete. Here’s a primer for who fans will see in the red, white and blue at Hazeltine later this month. Click here for a full rundown of Team Europe’s roster.

Bio: After missing the 2014 Ryder Cup, Johnson is back as one of the anchors of the U.S. squad this year. With his intimidating length, Johnson is a dangerous match play opponent and has put together a solid Ryder Cup resume after a disastrous rookie season in 2010. Johnson earned three points and was 3-0 in 2012 after his 1-3 start. For the U.S. team to win, Johnson needs to continue his momentum from a solid FedEx Cup playoffs. Bio: Spieth had massive expectations this year after his breakout performance in 2015, and even though he hasn’t added to his major total, he’s entering the Ryder Cup with a solid, if sporadic, season under his belt. He’s got two victories, one runner-up and one third place finish to go along with seven top-10s. In this year’s WGC-Match Play, Spieth solidified his match play credentials by running off three straight victories before losing to Louis Oosthuizen in the round of 16. Spieth entered the 2014 Ryder Cup as a rookie, but after his electric debut and two majors in 2015, he is now Team USA’s stud. Bio: Phil Mickelson is the elder statesman of this group, but he’s not just here for show. Ranked third in the points standings, Mickelson has pieced together an incredible season that only lacks a victory. But in classic Mickelson form, he’s been up-and-down throughout 2016. He missed the cut at the year’s first two majors, then put on a historic show against Henrik Stenson at the British Open. Lefty played in his first Ryder Cup way back in 1995, and he brings unmatched experience and leadership to this year’s team. Bio: Everyone remembers the crowd shushing from Gleneagles, but Reed backs up his on-course antics with phenomenal play. Along with a legit amateur record, Reed has a 9-5-1 record in singles as a pro. In 2014, he took on Europe’s Stenson in Sunday singles and defeated him 1 up. Reed also is picking up steam at the proper time; after winning the Barclays, he crept up to eighth in the World Rankings.

Bio: Walker doesn’t have the best match play record on this team, but with his ample power off the tee coupled with precise ball-striking, Walker can easily be paired with most anyone on the roster. In 2014, he partnered with Rickie Fowler for all four of the team matches and had three halves and a loss, and Walker was one of the few Americans to win in Sunday singles, as he defeated Lee Westwood 3&2. The PGA Championship winner has been up and down since his breakthrough major victory. He finished third at the Deutsche Bank after missing two straight cuts.

Bio: The only rookie to automatically qualify on points, Koepka could be the next American to boost his mainstream reputation with a Ryder Cup breakthrough. In the last two WGC-Match Play events, Koepka has proved to be a formidable opponent in singles, earning a 5-3 record. He crushes the ball off the tee and plays with a low-key steeliness, making him a solid pairing with a player like Brandt Snedeker or Zach Johnson. He played the PGA Championship with an injured ankle, but should be fully healthy for the Ryder Cup.

Bio: Good putters are always a tough out in match play, but Snedeker’s record doesn’t align with his putting prowess. His career singles record is 7-11-1, and as a team, he’s 3-3. He’s only played in one Ryder Cup and one Presidents Cup, so he’s not particularly experienced in this atmosphere. After a top-10 at the Masters, Snedeker has finishes of MC, T22 and T56 in the final three majors.

Bio: Johnson is definitely cruising on his 2015 performance, as the 40-year-old does not have a victory this season and his best finish was a fifth-place result at the Arnold Palmer Invitational. He is a veteran of this type of event, playing on four Ryder Cup and four Presidents Cup teams. He’s been paired with a variety of players over the course of those events from Phil Mickelson to Matt Kuchar to Hunter Mahan to Jason Dufner, with varying degrees of success.

Bio: Holmes has only played in one Ryder Cup, but he’s 1-0, as he was on the winning 2008 squad. He did compete in the 2015 Presidents Cup, where he paired with Watson for four matches for a 2-2 record but lost to Hideki Matsuyama in singles. His 2016 season has been a bit up and down; he has two top-5 major finishes but also two missed cuts.

Bio: Yes, by now you should know that Fowler has never won a Ryder Cup match and hasn’t had a stellar season so far in 2016. What he did bring to the table was intangibles. He’s a member of the task force and at age 27, he’ll be playing in his third Ryder Cup. Alongside Speith and Reed, Fowler can be one of the mainstays of Team USA for years to come.

Bio: Kuchar has a losing Ryder Cup record, but he’s very steady and a perfect complement to the eight members already on the American squad. In his last five matches in the Ryder or Presidents Cup, Kuchar has paired with Bill Haas, Reed, Z. Johnson, Bubba Watson and Jim Furyk. That versatility will be a huge asset to Love. Side note: Kuchar’s career singles record is a strong 21-12-1.

World Rank: 31
Ryder Cup Record: 0-0-0
Bio: Moore played his way onto his first Ryder Cup team this year, all but forcing Davis Love to use his final captain’s pick to add him to the roster with his stellar play throughout the FedEx Cup playoffs and his near miss at the Tour Championship. The 33-year-old Tour veteran will be a Ryder Cup rookie at Hazeltine, yes, but one with an extremely hot hand and a solid match-play record in both professional and amateur events.