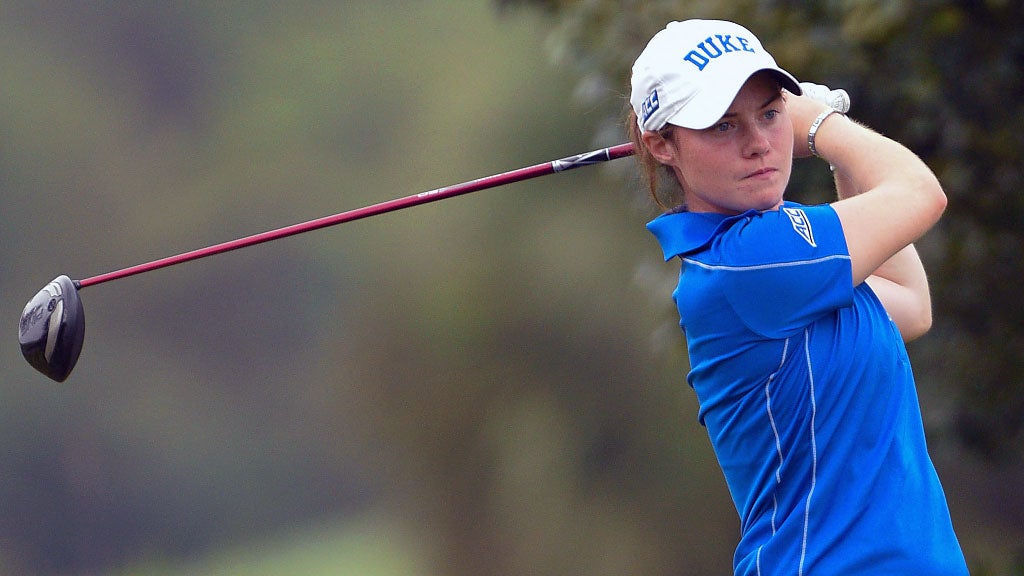 Some journeys can’t be measured in distance alone.

Case in point: the travels of Leona Maguire.

A year ago, when she left her small hometown in County Cavan, Ireland for North Carolina to begin her freshman season on the Duke University women’s golf team, Maguire barely registered in the World Amateur Golf Ranking.

Then began her meteoric rise.

With a win at the NCCA South Regional in Indiana this month, Maguire, 18, notched her third individual title of the 2015 season — a blip on the global radar no more.

This weekend, when the NCAA Division I Women’s Golf Championship unfolds at Concession Golf Club in Bradenton, Fla., where Maguire will tee it up alongside her teammate and twin sister, Lisa, the Blue Devils will be out to defend their 2014 national title and Leona will be competing as the top-ranked women’s amateur in the world.

In the midst of preparation for the big event, Maguire took time this week to speak with GOLF.com about her surge in the world ranking, the benefits of having a sibling rival, and whether we’ll soon see her on a different stage, like, say, the LPGA Tour.

You’d had plenty of success in amateur golf in Europe, but to golf fans in this country, your rise to No. 1 almost seems like it happened overnight. How surprising was it to you?

I wouldn’t say I expected things to happen this fast. But it’s a big confidence boost. It shows that my game is moving in the right direction.

“Right direction” seems like an understatement. How much do the rankings actually matter to you?

It’s a nice bonus. But really I’ve just been focused on improving my game.

What’s the biggest difference in where you are now compared to when you first arrived in the States?

It’s hard to single out just one thing. My iron game has been pretty strong of late. I’ve given myself a lot of good opportunities. But I’ve also been spending a fair amount of time in the gym, and I’ve gotten a lot longer.

Probably 20 yards off the tee. I had been hitting it somewhere in the 240s. I’m flying it closer to 260 yards now.

You didn’t take up golf in earnest until you were 11 years old. By today’s standards, you were practically a senior citizen. Any regrets that you didn’t start sooner?

None at all. I always enjoyed all kinds of sports. I did a lot of swimming. I played a lot of soccer. There’s a different mentality to playing team sports, but those other sports also help you build hand-eye coordination. Everybody’s different, of course. But I have no regrets about the path I took.

Do you still compete in other sports?

I still swim a fair amount. But soccer’s not the best sport for me to playing these days, injury-wise.

You’re 15 minutes younger than your twin sister, Lisa, who also plays for Duke. Given that you’re ahead of her in the world ranking, do you ever give her grief for how much you’ve made up for lost time?

(Laughs) Not really. If I did, she’d probably tell me to respect her elders.

How much of a sibling rivalry is there between you?

There’s always been a rivalry, our entire lives. But I mean that in a positive way. We’ve always been there to push each other. Growing up, we practiced together, we competed together, and that was a big part of getting our games to the next level. And it’s been great being together for the start of our college careers.

Was that a deal-breaker for you when you were looking at colleges? Did you both insist on going to the same school?

No. We looked at quite a few places. But the more we saw of Duke, the campus, the coaching, everything, it just seemed like the perfect fit.

Aside from the rest of your family and friends, what do you miss most about home?

Is there something wrong with grits and barbecue?

No. I love barbecue. A few of my teammates are from Asia, though, and they’ve been trying to get me to eat some of the dishes they grew up on.

How are they doing with that?

Any other big adjustments to life in the States?

The weather’s definitely different. Getting used to the heat and humidity has taken some time. With the NCAAs in Florida, we’ve been trying to practice more in the hottest part of the day, because it can obviously get incredibly hot and humid down there.

As the top-ranked amateur, do you feel a lot of pressure to win the individual title?

I’m not really thinking about it that way. I’m just trying to take things as they come. But it’s going to be great, with a new match-play format. And defending our team title, that’s going to add a whole other level of excitement.

Rory McIlroy, who’s from Northern Ireland, isn’t all that much older than you. Have you ever met him or played with him?

I’ve met him a few times just at trophy presentations and other events. But mostly I’ve just admired his game from afar. He’s phenomenal.

Has he ever given you advice, or texted you congratulations on any of your wins?

Not really. But a few weeks ago in the Irish media, he and Padraig Harrington both had some nice things to say.

How much attention does women’s golf get in Ireland?

It’s definitely growing. We’ve got Stephanie Meadow now, the first Irish girl to make it onto the LPGA Tour. So that’s great to have her out there flying the flag. Compared to some other countries, we don’t really have the biggest pool of players, so it would be nice for a few more of us to get out there.

Which raises the question, with all your success, how eager are you to turn pro?

It’s not really something I’m giving a ton of thought to. I’m certainly not in a rush. I’m just really enjoying where I am right now.

Plans for this summer?

I’ll go back to Ireland, spend a few months, play in some events. And then it will be back here for the fall semester.

What are you most looking forward to about getting home?

Does anyone else in your family play golf?

Dad does. He’s about a six handicap, so he’s pretty handy.

How many strokes will you have to give him?

Good question. Will have to figure that out.

What about the stakes?

Loser will probably have to clean the dishes.