Notables to miss the Masters cut: 8 players are out due to Augusta’s new rule 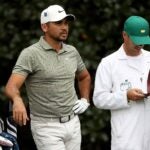 Jason Day shot 70-78 in the first two rounds of the Masters and missed the cut.

For the first-ever November Masters, which saw soft and scorable conditions during the first two days, the world’s best had to go low to stick around for the final two rounds.

Not everybody did. Matt Kuchar, Henrik Stenson and Gary Woodland were among the notable players to miss the 36-hole Masters cut, which was decided on Saturday morning after second-round play finished up from Friday. Kuchar, Stenson and Woodland were three of eight players at one over, which was a shot outside the cut line of even par.

With five players leading at nine under, the group of eight players at one over would have made the cut in previous Masters. But Augusta National announced a tweak to its cut rule this year, limiting it to the top 50 low scores and ties. From 2013 to 2019 it was the top 50 low scores and those within 10 shots of the lead. That 10-shot change eliminated that group at one over.

Last year, when Tiger Woods won, the 36-hole lead was seven under, and 65 players made it to the weekend with the cut at three over. Sixty players made the cut this year.

Other notables to miss the cut: Matthew Wolff (three over), Tyrrell Hatton (three over), Kevin Kisner (three over), Jason Day (four over) and Francesco Molinari (six over). To see the full leaderboard, click here.

Round 3 tee times begin at 10:30 a.m. ET on Saturday. For complete tee times, click here. Players will go off on split tees in Round 3.