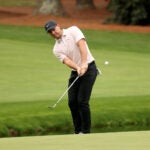 Rory McIlroy chipping during Tuesday's practice round at the Masters.

AUGUSTA, Ga. — Since the 2020 Masters was postponed some seven months ago, we’ve spent an unhealthy percentage of our time wondering what a fall Masters might look like — and how it might be different than the usual April edition. Well, we’ve made it to Masters Week. The players are on property. They’ve been playing the course. We actually have some non-hypothetical answers to all of those questions.

So let’s run through those questions and suss out some answers, using both my (limited) powers of observation and the wise words of some actual competitors. We’ll finish with the biggest difference, which is the most interesting part. Let’s get to it!

Will it be colder?

Not really. Highs are expected to be in the low 80s and it’s not really expected to drop below 60, which means the temperature shouldn’t be much of a storyline. That’s good because we’ll spend less time speculating on the unknowable question of Tiger Woods’ back and how loose it may or may not be.

Player’s take — TYRRELL HATTON: “I’m wearing [a hoodie] today, so yeah, I’ll wear it throughout week if the weather’s kind of cool enough to do so.”

(Note: I think it’s going to be too warm for hoodies, mostly, but there’s nothing better than a morning hoodie warmup, so I endorse this vision.) This sporty hoodie from Adidas golf is a great layering piece on or off the course. It features Cold RDY technology for insulated warmth, moisture wicking, UPF 50+, water resistance, and stretch.
Explore the Pro Shop Sold out

Will the weather be a factor?

Yes! The rains are coming. Tuesday brought sporadic showers to Augusta, and Wednesday and Thursday are only expected to get rainier. How will that affect the tournament? To quote one caddie: “Monday’s weather is looking good!” In other words, any disruption in the schedule could be tricky considering the lack of daylight available this time of year in Georgia.

Will the course be softer?

Yes, so far. Approach shots have been screeching to halts. Tee shots have been hitting and sticking. The Subair system, which is famous for its drying ability, has remained notably silent (when it’s running, you can hear the hum). It’s probably going to stay that way, too, given the time of year and the rain in the forecast — but let’s not underestimate the power of Augusta National’s technology, either.

In general, a softer course means a longer course, and a softer, longer course likely favors the bombers. I watched Bernhard Langer hit driver, 3-wood into the par-4 17th this afternoon, and it was a splendid 3-wood, but the more 3-woods a player is hitting into the greens this week, the worse off they’re likely to be.

“It’s still not the same as what it is in April because it can’t be.  I mean, you guys can do a lot of things here at Augusta, but I don’t think you’re magicians. So it’s a little different, but you know, that’s to be expected, and I think everyone is looking forward to it.”

Will the greens be slower?

So far, yes. They’ve been significantly slower. Downhill, crazy-fast putts are still downhill and crazy-fast, but they’ve not yet ramped these up to top speed. Will they?

Player’s take — TIGER WOODS: “Today, I did a little bit of work on the greens, just like I did last year. I took Tuesday off and didn’t play. Tried to get a feel for the greens, and the greens were a little bit slower than I had expected. But you know, with the rains coming up and the forecast, you just never know.”

What will be the biggest difference?

Let’s talk about grass. Specifically, let’s talk about the Bermudagrass that dominates Augusta National in the summer. That Bermuda gets “scalped” and the magicians on the grounds crew overseed with rye a couple before the club opens in the fall. Over the winter, that Bermuda dies out completely, leaving a wonderful green blanket of rye.

This fall, however, has been a particularly warm one. As a result, the Bermuda is still peeking through, some in the fairways and some in the greenside areas, which creates some extra intrigue. A bunch of players have mentioned this, and it’s a subtle, nerdy difference, which is exactly the sort of thing we’re here to tell you about. Here are a few players’ takes on this change:

“It is different.  I have been up here in the fall a few times and have played it, and it’s been like this.  But we’ve never played a Masters like this.  So it’s going to be very different for all of us, and some of the shots around the greens are going to be a lot more challenging than they have been in the past.”

JUSTIN THOMAS: “The ball doesn’t sit nearly as well around the greens with I think both the Bermuda and the overseed coming in, you’re going to have some sketchy lies around the greens, balls that are sitting down to where you’re not going to be able to get the spin that you’re used to getting, especially chipping up to the elevated greens or when you need to spin one, hold it against the slope or whatever it is.

“But I think you’re going to see that over the course of the week.  Definitely some chips that kind of come out high and knuckly and with a lot of top spin on it.  But everybody has to deal with it.  Everyone is playing the exact same golf course, so you can’t complain or make a fuss about it because everyone is teeing it up in the same spot on Thursday.”

XANDER SCHAUFFELE: “It seems to be softer, a little bit more Bermuda, I’d say, is probably the biggest change.  This is only my third Masters and everyone has played a lot more, so for me, the switch shouldn’t be too difficult because I don’t have a whole lot of experience, so I’ll try and use that to my advantage.”