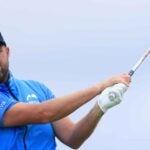 Marc Leishman is right on the cutline at the 2021 Open Championship.

Frustrations are boiling over at Royal St. George’s.

First it was Bryson DeChambeau’s post-round dig at his driver on Thursday. Then, on Friday, Tyrrell Hatton snapped his iron after missing his approach to the right on the 18th hole. But they aren’t the only ones seeing red at the Open Championship.

According to tweets posted by the PGA Tour’s Ben Everill, after missing his “4 millionth” putt on the 10th hole, Aussie Marc Leishman bid a violent farewell to his flatstick and proceeded to putt with his wedge on his remaining eight holes.

Incredibly, Everill says Leishman drained a 15-footer for par on No. 11, and raised his “hands to the heavens in thanks.”

Leishman summoned plenty of magic with the sharp edge of his wedge, draining putts for birdie on Nos. 12, 17 and 18 to sign for a second-round 67. At the time of his finish, that was good enough to sit one shot shy of the cutline, with the wind expected to pick up and the afternoon wave just beginning their rounds. Leishman trails Collin Morikawa’s lead by 11 shots.