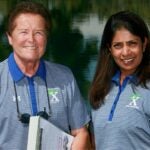 Of all the things Sister Lynn Winsor has brought her high school golf program, the results are always referenced first. Since 1974, when Winsor took over as head coach at Xavier College Prep, in Phoenix, the school has won 36 Arizona Interscholastic Association (AIA) Division I girls’ state championships, including a run of 16 in a row.

Since 1996, the team hasn’t lost a regular-season match to another school.

That’s 255 wins, zero losses and a handful of ties. The program has become a consistent pipeline to the LPGA with Xavier grads Heather Farr, Cheyenne Woods, Grace Park and Amanda Blumenherst all reaching the top ranks. When asked to explain the program’s incredible run, Winsor humbly defers to her current co-head coach Tui Selvaratnam and other assistants throughout the years.

“I always made sure I surrounded myself with people who are better than I am, and were better players, and know everything,” she said.  “If every coach in this world of any sport had a co-coach or assistant coaches like I’ve had, your job is a joy.”

Winsor’s golf journey began at an Arizona State sorority where her roommate first introduced her to the game. By the time she entered the convent and was taking graduate classes at the University of Iowa, she was playing golf frequently and learning the game’s intricacies. Xavier hired her to lead the golf team — and also the basketball and softball teams. One part nun, three parts coach.

“People always say, ‘How can you be a nun and coach?’ Hey, it’s the easiest thing on earth,” Winsor said. “Because all the values you have as a sister — kindness, caring, love of God — those things you can all incorporate right into your team.  It should be natural. So I think being a sister and being a coach are very, very coordinated together.”

Winsor credits the beginning of the Xavier Prep dynasty to the Farr family — sisters Heather and Missy.

“The publicity that [Heather] brought in, her attitude, and her great golfing skills and just the friendliness — it just built the program up, and from then on we’ve just kind of gone along,” Winsor said. Downplaying her impact is one of Winsor’s trademarks.

Then again, there is always the fainting story.

At the state tournament in 1979, Heather was in contention but struggling on the the front nine. Winsor’s only chance to coach her star player came when she made the turn. “I mean, she was by far the best golfer in Arizona. She did not play well. So I thought, ‘How am I gonna motivate her?’” Winsor said.

“So Heather came up … and she said, ‘I shot at 43.’ I pretended I fainted right on the ground. I went right down on the ground like I collapsed. And of course, she dropped her clubs and everybody came up — they thought something really [terrible] happened. And I looked up and I said, ‘Heather I fainted because that was a terrible score for you. You know what you can do. You are the greatest golfer out here on this course. Now you get up and you play like the great golfer you are.'”

Farr went on to win the tournament. And the next two state titles as well. Then her sister Missy stepped in, winning the crown in 1982.

As for the team as a whole, the Gators have redefined levels of dominance in Arizona women’s golf. In 1989, they won the state championship by 191 strokes. In 2006, it was 82. According to Winsor, in her first state championship Xavier Prep finished with a two-day tally of 798. This past year, even as they finished second to Pinnacle High School, Xavier carded a team score of 578.

To no surprise, Sister Lynn has received almost every individual accolade possible. She’s been named National High School Athletic Director of the Year, National Federation Coaches Association Golf Coach of the Year (twice), and in 2018, was given the Arizona Interscholastic Association Lifetime Achievement Award.

And yet, regardless of all her accolades and trophies, it’s the utter devotion to her students and their development that remains at the forefront of her mind. Winsor doesn’t even play golf anymore; the last time she played a serious round was before her time in the convent. Her entire career is based around uplifting her pupils.

“You know, winning is great. Don’t get me wrong, the kids like it, I like it, Tui likes it, the parents like it,” Winsor said. “But when you come back, you see [students] coming back 40 years later, and 30 years later, and still loving golf and having the values and having families, they come back and say thanks for what you did. I think that for a coach, that’s the biggest thing.”