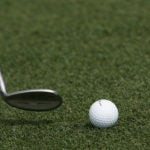 High school golf was very much played this spring.

When the coronavirus pandemic canceled prep play across Connecticut, it did not end ingenuity. The nine-team South-West Conference put together the virtual chipping challenge for its girls golf teams.

“The South-West Conference athletics directors kind of came together, and we just wanted to give the kids something fun that they could do,” Matt Memoli, the Newtown High School Athletic Director, told NBC Connecticut.

The competition was played across backyards. Each player hit to targets 10, 15 and 20 yards away. The shots were videotaped, and results were recorded over a Zoom call.

“We love going to other golf courses and having teams come to us and having that social interaction,” Jason Akacki, the coach at Weston High School, told NBC Connecticut. “I know it’s online, but it really comes down to the girls would really love to have some type of competition.”

The golfers did see a wide range of courses.

“The kids took it so positively and had such an open mind,” Memoli told NBC Connecticut.

The teams’ regular season would have ended last Thursday. The conference tournament would have been this week, and state the following.

High school golf was still very much played this spring.

“Outside of classes, there’s not much going on,” Catie Morvillo, a senior on the Weston High School team, told NBC Connecticut. “Even if we don’t have a full golf season, it’s really fun to still be able to compete with the other teams.”