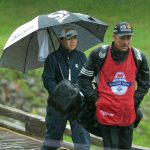 Nasa Hataoka and her caddie made the most of a shortened tournament this weekend.

In a rare decision brought on by a relentless Mother Nature, the LPGA Tour’s Marathon Classic ended early Sunday and never got going again. That was that.

The event was shortened to 54 holes after a full day of rain left the course unplayable, according to the Tour. The good thing is it won’t have much of an asterisk at all. Nasa Hataoka was in full control, up six shots on the field after three rounds.

“Knowing everybody is working really, really hard to try to get this to a 72-hole tournament. I wish it would’ve been able to do it, but with this weather it was really hard,” Hataoka said. “I’m happy to be able to win.”

Toledo, Ohio saw nearly 1.5 inches of rain fall Sunday, in a storm that, according to the Tour, lingered over Highland Meadows Country Club. With Monday’s forecast calling for another quarter-inch of rain and intermittent storms, the Tour made the call to revert the event (which had started the final round briefly) back to the 54-hole leaderboard.

“Our first priority is always to complete four [rounds] and while we hoped to be able to finish on Monday, the weather forecast was again unfavorable after 11 a.m.” said Sue Witters, LPGA VP of Rules and Competitions.

As a result, the 61 that Hataoka fired in the first round was more important than ever. Analytically, the most important round on the LPGA Tour all season.

While it is rare to have an event shortened, it does happen on occasion. Just last summer the Cambia Portland Classic was shortened due to visibility and health hazards in Oregon with forest fires running rampant in the area. The Tour will stay in the midwest this week, heading to Michigan for the Dow Great Lakes Bay Invitational.