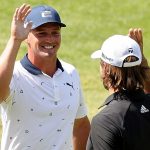 Bryson DeChambeau had a busy week, winning The Match 4 and selecting a new caddie.

Check in every week for the unfiltered opinions of our writers and editors as they break down the hottest topics in the sport, and join the conversation by tweeting us @golf_com. This week, we discuss the fourth and final major of the men’s season, the fourth iteration of The Match and Bryson DeChambeau’s new caddie.

The Open Championship, the year’s final men’s major, is upon us. It’s been two years since the last Open, where Shane Lowry hoisted the Claret Jug in 2019 at Royal Portrush. It’s also been 10 years since this year’s host, Royal St. George’s, hosted previously. Which of the many storylines ahead of the event intrigues you most?

Josh Sens, senior writer (@joshsens): Rahm Watch, for starters. The top-ranked player in the world on a ridiculously torrid stretch. Back-to-back majors? He’s rightly favored. It will be fun to track him. As a subplot, having just watched the English national team lose in penalties at Wembley in the European Cup, I’m reminded that it’s been a good long haul since an English golfer has won the Claret Jug (Nick Faldo in 1992). This will be a home event. A number of English players enter in good form. Can one of them pull off on home soil what the soccer team couldn’t?

Dylan Dethier, senior writer (@dylan_dethier): Rahm Watch is the correct lead story. But I’m eager to see Rory McIlroy returning to the Open for the first time since his emotional missed cut at Portrush. He hasn’t looked particularly strong the last two weeks at the Irish and Scottish Opens, but two of McIlroy’s most recent four wins have come off MCs. Which version shows up this week?

Sean Zak, senior editor (@sean_zak): I’m intrigued by the grumblings from Tour players about quarantines and restrictions in place for them. Is it fair they’ll have to live a little less comfortably while the R&A invite 32,000 fans to the course to spectate? Probably not, but thems the rules this week. Deal with it, and go out and win the damn thing.

Michael Bamberger, senior writer: Golf is inching its way back to these-are-the-good-old-days. It’s not there yet, nor is the world. This week gets us closer.

Bryson DeChambeau, in an exclusive story with our Luke Kerr-Dineen, explained his breakup with caddie Tim Tucker and announced his new caddie, Brian Zeigler. With just a week before the Open Championship, and considering DeChambeau’s unique system, how much does a new looper affect DeChambeau’s chances?

Sens: Let’s not overthink this. Bryson isn’t tasked with sending a rover to Mars. He needs to have a strategy for a golf course. I suspect he already has a good idea as to how he wants to attack Royal St. George’s. And if he doesn’t, he’ll certainly have a battle plan in place by Thursday. His chances will be determined much more by his wedges and his putter than by who(m) he has on his bag.

Bamberger: Oh, young Sens: we must overthink it, lest BDC think we’re not thinking enough here. This is a very serious ask, a mountain too far, etc. I fear a 147 may be in his future.

Dethier: And by how frequently he hits driver out of play. DeChambeau hasn’t been quite right of late, and he definitely wasn’t right last week post-breakup. Caddies matter, but it’s always hard to quantify HOW they matter. Who knows — maybe this new chapter will provide a boost.

The Olympic teams were finalized this week, with the men’s tournament to be played July 29-Aug. 1, and the women’s tournament Aug. 4-7. Who do you like to take home gold for both the men and women at Kasumigaseki Country Club?

Sens: On the men’s side, the U.S. is loaded for bear, with JT, Bryson, Xander and Morikawa on the roster. I like their chances. For the women, South Korea is sending four players, including Inbee Park and Jin Young Ko. Seems unwise to bet against them.

Dethier: On the men’s side, the bigger question is which team you’d take after the U.S. I’m particularly intrigued by Marc Leishman and Cameron Smith repping the Aussie squad … On the women’s side, who is playing better than Nelly Korda?

Bamberger: Or a female golfer with the surname Korda, just as the WIlliams sisters could pick each other up, in Venus’ prime. For the men, I wouldn’t hazard a guess until the British is over. I’d be looking at players who do not contend, or maybe even play, there.

Zak: Justin Thomas is rounding into form, just in time to miss the major championship season and nab another FedEx Cup. In the process, he might just snag a gold medal as well. He’ll be one of the only players with a family member in attendance, since his father is his coach. As for the ladies, I’ll be pulling for Mel Reid for various reasons, but I think Dylan is right. Nelly is playing some scary golf right now.

On Tuesday, the fourth edition of the Match was played, and the team of Bryson DeChambeau and Aaron Rodgers defeated the team of Phil Mickelson and Tom Brady. Among the highlights: DeChambeau hit a nearly 500-yard drive; Rodgers drained putt after putt; and Mickelson was at Phil-est, as expected. With there no doubt being future Matches, whom would you like to see in the next one, and where would you like to see it?

Sens: Enough with the jocks. Give us people who can really do banter. Phil and Larry David against Rory and Bill Murray. And if you’re going to call it the Match, might as well play it at Cypress Point.

Bamberger: This is great.

Dethier: Phil Mickelson and Bryson DeChambeau take on the Korda sisters at Pine Valley, celebrating their new more-open membership policy. Who says no?! (I know Pine Valley says no, but still.)

Bamberger: That is great.

Zak: Dylan is right again. We need some women involved! The Korda sisters would be a lot of fun, but I don’t want them playing as teammates. Maybe it’s Phil and Nelly Korda against Justin Thomas and Jess Korda? As for the host course, we’d want another visually appealing one. How about Arcadia Bluffs, the cross-lake cousin of Whistling Straits?

Bamberger: Truly a homer at work. I like! I’d like to see two college players against two Tour elites, in the traditions of Match I, as Josh suggests. We need new. Golf needs new.

In a bizarre incident during the first round of the Scottish Open, a fan stepped onto the first tee, grabbed Rory McIlroy’s headcover and an iron, and attempted to take a swing. On the heels of the streaker at the U.S. Open last month, where does this incident rank among wild fan interruptions?

Sens: No disrespect to streakers, but they are pretty much cliche at this point. This week’s incident was the strangest I’ve seen. And the most unsettling. It didn’t seem like something done on a dare or as a drunken lark. It was joyless and kinda creepy.

Dethier: Extremely creepy. It won’t be as memorable as the John Daly “19th Hole” streaker moment but it will certainly occupy a strange corner of my brain for a while to come.

Zak: I think we’ll always wonder what would have happened if the guy actually took a slash at that doggy headcover of McIlroy’s.

Bamberger: The less said about it, the better. But I was really impressed with how the players and caddies and security officials handled it. They didn’t let is escalate. I was standing on 18 in ‘85 at RSG when Peter Jacobsen tackled a streaker in full flight. They were both in full flight. I’m guessing Pete regrets it. Somebody could have ended his career right there.

On Monday, GOLF announced its latest fleet of Top 100 Teachers of America, a biennial list of the best instructors in the country. What moment or breakthrough with a golf instructor has made the most impact on your game?

Sens: A couple of years ago, our own instruction editor Luke Kerr-Dineen told me that I was rotating my shoulders too horizontally, and that I needed to get them more tilted on the turn, almost like I was driving my left shoulder toward the ball on the backswing. For a magical three months after, I don’t think I missed a shot. I considered quitting to take up a more challenging game. And then one day, as magically as it had worked, that swing thought tragically stopped working. I’ve been in a dark place since. Still waiting for the next lightning bolt to strike.

Dethier: I had the good fortune to spend some time with a fine instructor named Grant Rogers at Bandon Dunes a few years back. I mentioned to him that I felt like I couldn’t repeat my swing from one to the next. He shrugged. “Nobody can,” he said. That freed my mind for good.

Zak: Honestly, any lesson from our Pros Teaching Joes series, of which I have been the most constant beneficiary. Chipping tips from Xander, wedge consultancy from DJ, driver swing thoughts from Matthew Wolff. They all help just a little bit, and that index of mine is shrinking.

Bamberger: A teacher named John Stark put me on a path to getting deeper pleasure from the game. That was in 1990. I’ve seen some signs of his wisdom sticking.