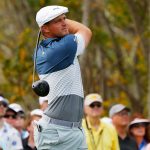 Outside of LPGA star Brooke Henderson and long drive competitors, the 48-inch driver is a rare sight at most golf courses. Going longer in length is one way to add yards to your tee shots, but anything beyond 46 inches typically comes at a cost in the accuracy department — unless you know how to wield the extra lumber.

It’s one of the reasons why so many pro golfers use something in the 43- to 45-inch range.

At 45.5 inches, Bryson DeChambeau’s Cobra driver is slightly above the average, but that hasn’t stopped the PGA Tour’s leader in driving distance from contemplating ways to get even longer. In addition to starting a training regimen to bulk up and capture more speed — DeChambeau recently mentioned trying to get all the way up to 270 pounds — the 5-time Tour winner also confirmed he’s considering the idea of using a longer driver.

During one of his regular Twitch streams, DeChambeau was asked if he’d ever use a 48-inch driver. Without hesitating, he confirmed it wasn’t out of the realm of possibility — he’s already tried out a driver with 4.8 degrees of loft — provided it didn’t come with a noticeable dip in “control.”

“I’d definitely use a 48-inch driver — if I could control it,” he  said. “I’d generate so much more speed, but it’d need to be light enough, though. We’re definitely going to mess with that. Trust me, if the USGA allows me to go to 48 inches with the driver — and I hit it just as straight as my 45.5-inch driver — why not?”

The USGA’s legal limit for shaft length is 48 inches, so DeChambeau doesn’t have to worry about creeping into non-conforming territory if he does decide to test a 48-inch Cobra driver. What he would need to worry about — as he briefly mentioned — is the significant change in swing weight that would occur going from 45.5 to 48 inches. To keep things somewhat similar in the weight department, he’d need to locate a feathery head and shaft. Going smaller in head volume is another option.

In other words, there are a lot of variables at play when you go significantly longer in the shaft department. Considering the numbers DeChambeau has been putting up on the launch monitor recently, he doesn’t need to worry about squeezing every yard out of his driver to keep up with the competition.

Just last week, DeChambeau hit 203 mph ball speed with his driver during the “Speed Zone challenge” — a number normally reserved for the World Long Drive circuit. Then again, with extra free time at home, it couldn’t hurt to test out a longer driver and see what happens.