Like the Azaleas, Skipping Balls on 16 Is a Masters Tradition 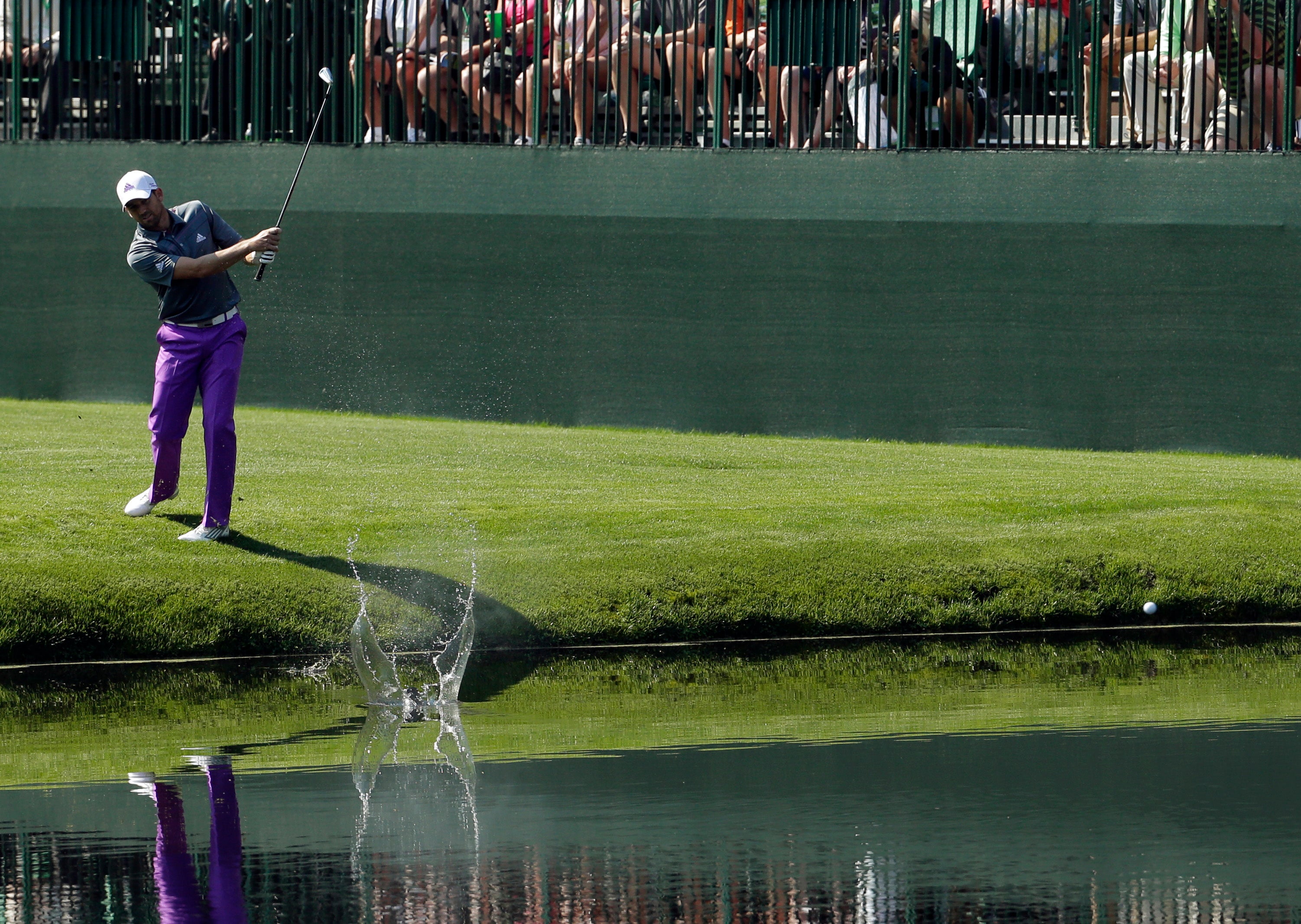 Sergio Garcia skips a ball across the water on the 16th hole during a practice round prior to the 2016 Masters.
AP Photo/Chris Carlson, File

The chants start as soon as each group has finished teeing off at the 16th hole.

At staid ol’ Augusta National, this is the closest thing to a party.

“The fans get pretty irate when they don’t skip the ball,” said Masters patron Dave Goldbach of Buffalo, sipping on a beer as the final groups came through in the fading sunlight of Tuesday’s practice round.

For many, this is the place to be before the first major of the year gets going for real, a chance to watch everyone from the biggest names in golf to unknown amateurs attempt to skip the ball off the water — the more times, the better — and land it safely on the green.

It’s a technique roughly akin to throwing a smooth rock across a glassy pond. Only in this case, it’s done with a 4-iron instead of a strong arm, after dropping a ball on the downslope in the second cut of grass between the tee box and the water on the 170-yard hole known as “Redbud,” tucked back in a far corner of the course, about as far from the clubhouse as you can get.

The 16th — essentially a tee and a green connected by a narrow strand of water — has been the sight of many dramatic moments at the Masters, from Tiger Woods holing an improbable chip that carried him to the green jacket in 2005 to Greg Norman dumping his tee shot in the water to finish off a stunning collapse two decades ago.

There’s nothing on the line during the practice rounds, which allowed for a tradition that dates to the 1980s and has become as much a part of the place as blooming azaleas and pimento cheese sandwiches.

No one in an official capacity is quite sure when all this started, but former player Ken Green took credit for it during an interview with Golfweek.

Davis Love III played his first Masters in 1988. Even as more and more players took part, he refused for several years to join the skip-a-thon at No. 16, mindful that club founders Clifford Roberts and Bobby Jones likely would’ve frowned on those sort of hijinks.

“I didn’t think it was in the tradition of the Masters,” Love said. “Then I started getting booed.”

Indeed, this is the one spot where the patrons, who are expected to be on their best behavior most of the week, can let down their hair just a bit. Not to say the heckling approaches anything you might hear coming from the bleachers at Yankee Stadium, but no one will be thrown off the grounds if they direct a hearty catcall at anyone who refuses to take part.

“When no one put a note in my locker saying not to do it,” Love went on, “I decided it must be OK. So I started doing it again.”

Now, as he prepares to play in his 20th Masters, the Ryder Cup captain has developed into one of the better ball-skippers. The 51-year-old showed off his form to a couple of younger players Tuesday, rocketing the ball into the water just a few feet past the bank to produce one towering bounce, followed by a couple of smaller hops that sent it bouncing onto the green.

Amateur Paul Chaplet, playing in his first Masters, decided to keep his ball low all the way.

He got three short skips before his ball whacked the grassy bank at the other end of the pond, falling back into the water. There were shouts of “Again! Again!” but he merely smiled and began the walk of shame toward the green.

Chris Kirk also went for a shot that was never more than a few inches off the water. Same result, though he did score points for smacking a GoPro camera installed along the bank to provide a water-level perspective of the whole scene.

“I went for the low shot,” Kirk said, grinning. “Davis goes with a higher ball. Obviously, his worked better than mine.”

The fans really get into it, reminding Goldbach to bring up another 16th hole known for its boisterous shenanigans at the Phoenix Open. OK, so it’s not that wild — c’mon, this is Augusta — but there are certainly plenty of etiquette-diminishing suds flowing among fans who pack the grandstands and the towering hill that provides a natural amphitheater for both the 16th and the adjacent sixth hole, also a par-3.

“It’s an exciting aspect of watching a practice round,” said Goldbach, attending his first Masters along with a friend, Roger Kapturowski. “There’s an art to it. It’s all in the technique.”

Six-time Masters champion Jack Nicklaus would occasionally skip the ball at the 16th, but only when he was at the club working on his game the week before the tournament.

He never tried it in front of the patrons.

“I don’t think I was good enough,” the Golden Bear explained. “And I was too cheap. I didn’t want to lose a golf ball.”

These days, hardly anyone is willing to risk the wrath of the crowd by skipping the chance to skip.

Right then, Augusta National Chairman Billy Payne pulled up on a golf cart.

“Maybe we should ask the chairman if it’s OK to skip the ball,” Love suggested. “I wonder what he would think if we did it during the tournament.”

What about it, Mr. Chairman?

“Can you do it during the tournament?” Payne repeated, pursing his lips and pausing for dramatic effect. “Only if it goes in.”