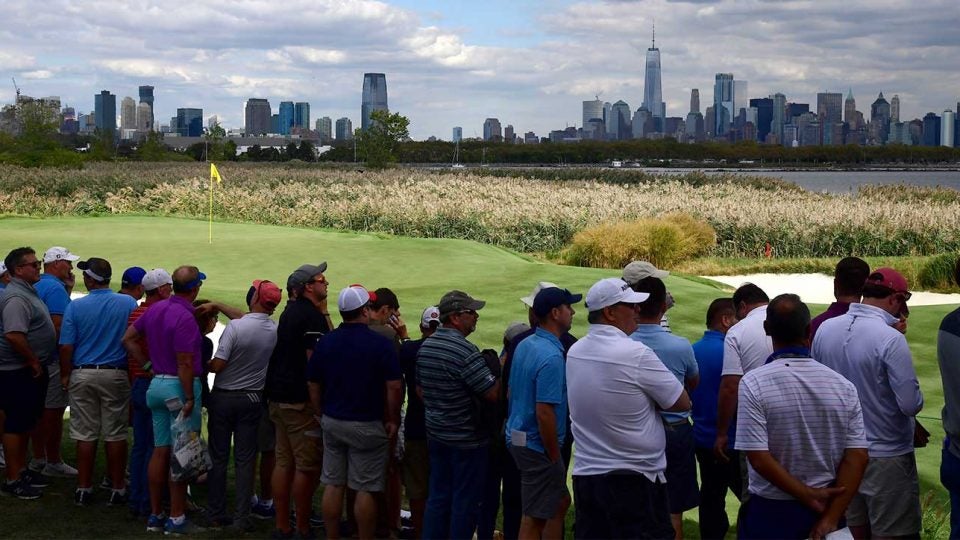 JERSEY CITY, N.J. — Liberty National Golf Club’s best asset looms on the horizon as you stroll up the 18th fairway. It’s not so much the design of the hole that wows — a straightaway par-4 with water down the right — it’s what’s behind it. A glass-wrapped post-modern clubhouse sits to the right of the green and, beyond that, the wonders of the Manhattan skyline: the Empire State Building, One World Trade, New York Harbor. It’s all there before you.

From the moment Reebok founder Paul Fireman and his son, Dan, purchased the property more than 20 years ago, Liberty’s location has been its central selling point. That’s still true, but as the club — which this week is the venue for The Northern Trust Open, the first leg of the PGA Tour’s FedEx Cup Playoffs — continues to evolve, it’s aiming to become known for more than just its postcard views and moneyed membership. Liberty is striving to open its gates (and show itself off) by becoming a tournament venue for a diverse group of tours and organizations.

“The Firemans had quite a few visions for the property,” says Lee Smith, Liberty’s managing director. “But one major vision was to create the ‘Pebble Beach of the East’. Not necessarily be a public facility like Pebble Beach, but to create a tournament venue or a championship venue that sat in the shadows of the New York City skyline and the Statue of Liberty and the Hudson River — these views that can’t be replicated — and create a property that everyone can play.”

News
At 43, Tiger Woods rediscovered his game, his love for it, and true happiness

Liberty, which sits on a former Superfund site, cost more than $300 million to construct. Most golf fans got their first look at this landscape-engineering marvel when it welcomed the 2009 Northern Trust (then The Barclays), won by Heath Slocum. Based on feedback from players after that week, the club made considerable renovations, in large part to the topsy-turvy green complexes. The tournament returned in 2013, with Tiger Woods leaving short (just barely) a birdie putt on 18 to force a playoff with Adam Scott. After making a few more cosmetic changes, Liberty was awarded the 2017 Presidents Cup, which proved to be a landslide victory for the Americans and a landmark moment in the club’s short history.

“After hosting the great players in the world in ’17 for the Presidents Cup and really getting very, very positive feedback after that,” Smith says, “I think we realized that this is a golf course that’s here to stay and is ready to challenge the best players of the world, and championship players of all levels.

“We don’t need to make many more changes, we just need to do.”

That aha moment has catalyzed swift action. With the goal of playing host to more tournament golf, Liberty began reaching out to various golf organizations, and not just the elite tours. Liberty is a private club with a glittering list of A-list members, but it is working hard to ensure that the “Pebble Beach of the East” moniker isn’t mere lip service. Last month, the club played host to an AJGA event, the Polo Golf Junior Classic, making a point to give the youth golfers a Tour-pro-esque environment, complete with roped-off fairways. Next month, Tiger Woods’ Nexus Cup will visit Liberty. A two-day invite-only tournament that is being dubbed as the “ultimate amateur golf experience,” guests will be showered with “curated gifts, exquisite cuisine and fine wine.”

Tournaments
USGA alters rule, will allow professionals to compete after qualifying as amateurs

In October, Liberty will cater to a slightly different clientele, when it serves as the venue for the finals of the Barstool Classic, a “member-guest”-style event run by Barstool Sports, whose sports-mad personalities and fanbase wouldn’t be described as a country-club crowd. Barstool touts the event as the go-to championship for weekend golfers, making it the starkest example yet of the “open to all” mantra that Liberty hopes to foster.

“You think if you know the golf world that maybe [Liberty National is] one of those unobtainable places,” said Sam Riggs Bozoian, a Barstool golf personality and the commissioner of the Barstool Classic. “I was definitely a little surprised. But once I was able to speak to a few of their people, it became very clear this is something they’d love to align themselves with.

To Liberty, that’s all part of the intent. Certainly it hopes and expects to play host to more high-profile events, and The Northern Trust will once again serve as a crucial litmus test as the club set its sights ahead. But just as vital to Liberty’s new positioning is the idea that the course is here — on the coast of New Jersey, peering at Manhattan — for everyone’s benefit.

“Regardless of whether you’re a 15-handicap male or a scratch female player, we want Liberty National to be something that you recognize,” Smith says. “Maybe you don’t get to play it 51 weeks a year, but that one week a year that we do allow for a championship event, we want you to try to qualify and get over here and be able to take part in it.”