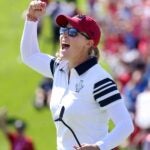 Jennifer Kupcho electrified the crowd with a chip-in on 17 to win the hole for Team USA.

TOLEDO, Ohio — The ball was sitting up in the rough, just off the green. But there was little room to work with. A delicate touch was a must. No small ask in a nervy moment like this one, with a critically important Solheim Cup point in the balance.

Jennifer Kupcho approached her ball by the 17th green at Inverness, talked over her shot with her caddie, took a deep breath and drew back her club.

The ball checked. The ball rolled. The ball … dropped into the bottom of the cup. The U.S. fans crowding around the 17th green erupted. So did Kupcho.

Heading into the par-4 17th, Kupcho and partner Lizette Salas were all-square in their match against European adversaries Mel Reid and Leona Maguire.

Salas wasn’t making things easy for Kupcho, either, spraying her approach shot to the right of the green and barely advancing her ensuing chip from the rough. It was all up to Kupcho, a Solheim Cup rookie.

“She doesn’t play like one,” Salas later said of her partner, “and I never approached her like one, and she definitely doesn’t have a game like a rookie.”

Not only did Kupcho’s chip-in fire up the crowd, but it also supplied a much-needed jolt of momentum to the U.S. side after Kupcho and Salas had squandered their 2-up lead on holes 12 and 15. Now, the U.S. had regained the lead and the momentum.

But one hole still remained.

Enter Mel Reid. Battling an injured right shoulder, Reid — playing alongside Irish rising star Leona Maguire — striped her drive on 18 then took dead aim at the flag, which was tucked on the front-left corner of the green. Reid’s ball caught the left rough but kicked out and trickled to within three feet of the hole.

Just like that the pressure was back on the Americans, neither of whom could deliver a birdie. When Reid rolled in her near-gimme, she had evened the match and helped the Europeans salvage half a point.

“I just saw kind of a wave of yellow and blue, which was all our team,” Reid said of the scene around the 18th green, “and I knew I had to pull something off. Leona has been obviously holing the winning putts everywhere, so I thought I’d take a little bit of credit finally.”

Europe leads the U.S., 9-7, heading into Labor Day’s singles matches. What lies ahead? If the Kupcho-Salas/Reid-Maguire match was any indication, good luck with your predictions.

Check out our interview with Kupcho from earlier in the week: