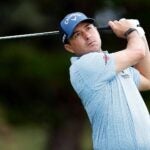 Golf is still a job for Kevin Kisner, and fortunately, a high-paying one.

In late-October 2002, Herm Edwards ascended from his role as (then) New York Jets head coach and into press conference immortality with the utterance of six unforgettable words.

“You play to win the game,” Edwards said over and over.

It was the soundbite of the year — and then for several years to follow, in large part for Edwards’ incredulity and in small part for his authenticity.

You play to win the game.

Edwards, we’re afraid, would be on the precipice of another meltdown if he heard Kevin Kisner’s press conference from the Sony Open on Wednesday.

Kisner is, by every measurement, a successful golfer. He’s spent nearly 15 years on the PGA Tour and is a household name for many golf fans. But wins do not come easily in the pros, even for an established player like Kisner. The 36-year-old has managed just three victories in his 15 years on Tour.

Even with only a handful of victories, Kevin Kisner, like Herm Edwards, plays to win. He’s a professional athlete. We’ve heard the axiom that ‘any player can win on any week’ hundreds, perhaps even thousands of times before.

Kisner can win anywhere. He just hasn’t yet. Right?

“Probably not,” he told reporters ahead of the Sony Open on Wednesday. “I’m not going to win at Bethpage Black or Torrey Pines.”

So why bother showing up? Kisner was surprisingly candid.

“Because they give away a lot of money for 20th,” he said with a laugh.

Now, Kisner admitted he doesn’t often show up to events just to collect a paycheck, but some carry more weight than others.

“Not many, but it depends on where the majors are,” he said. “I just don’t go to the Tour events that I don’t think I can win.”

Kisner’s comments reinforce a fundamental truth for every Tour pro: golf is a job, and jobs are supposed to make you money. For as much as fans and media build up professional athletes to be semi-human competitive machines, they’re ultimately not much different from the rest of us. They want to earn a living, and they want to experience the seminal moments in their profession, even if that means living without a winner’s check.

“I don’t think I can make up enough ground in the areas that I’m great on certain courses, so I just don’t attend those,” Kisner said. “On the flipside, I think I probably put too much pressure on myself on the courses I know I can win at. I have to be cognizant of that.”

Good for Kevin Kisner for his earnestness, even if it means he’s probably better off ducking Tempe, Ariz. (where Edwards is the head coach at Arizona State) for the time being.