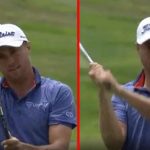 JT had the catch of the day on Saturday at the U.S. Open.

Justin Thomas leaves Saturday afternoon at the U.S. Open with a fish story.

No, he isn’t too close to contention at Torrey Pines (sitting six strokes back through the early portion of round 3 play), nor does he have his second of the four “big ones” on his line — at least not yet. But make no mistake about it, he caught the funniest moment of the tournament after his chip shot from just off the 8th green on Saturday.

It all started when Thomas walked to the tee on the 8th hole, a 171-yard par-3. In order to entice a risk-reward flavor on the hole, the USGA tucked the flagstick on the front shelf of the green just behind a large, mounded bunker. The strategy was simple enough: those who executed their tee shot properly would wind up on the shelf and face a simple, relatively straight birdie putt. Those who did not would face a difficult two-putt or up-and-down in order to save par.

Needing a spark (and several birdies) in order to vault himself into the thick of contention, Thomas locked in on the flag, but his approach landed a whisker short, tumbling into the rough just next to the bunker. He faced an awkward second shot with his feet in the bunker, but his chip would be aided by the shelf behind the flagstick, expanding his margin of error.

Seconds later, JT settled into an awkward stance and struck his shot, which rolled onto the green and past the hole. But the fun was only beginning. Just as the ball reached the top of the embankment, gravity began to pull it back toward the pin.

Standing in the bunker, Thomas flipped his wedge in the air like a fishing pole and began reeling it back in — throwing in a few pulls on his line for good measure.

“He’s reeling it in!” NBC Broadcaster Dan Hicks said with a laugh.

When all was said and done, the 28-year-old faced only a tap-in for par, which he rolled in easily.

He might not have the championship when the weekend concludes, but the adoration of the Torrey Pines faithful? Well, they’re hook, line and sinker.