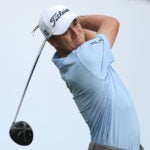 Justin Thomas hits his tee shot on the 16th hole at TPC Harding Park on Friday.

Justin Thomas couldn’t hit the driver. He averages just over 300 yards off the tee. The 16th hole at TPC Harding Park was playing 285 yards during Friday’s second round of the PGA Championship. He would hit it too far.

Thomas couldn’t hit the 3-wood. He would hit it short.

Thomas could hit a driver. He would hit it low.

It got just 25 feet off the ground. It landed 18 feet away from the hole. He finished with a birdie. Thomas had been over 2-over before the hole and was 1-over after – the same number as the cut line.

“3 wood not enough, driver too much… low slice driver it is!” Thomas wrote on Instagram under a video of the tee shot. “Enjoying Harding Park thus far where anything can happen. Time to go have ourselves a weekend.”

Thomas lined up on the right side of the tee box. He started his ball at the trees to the left of the green. Then it bent right. It had 84 feet of curve and traveled 237 yards over about 4 seconds.

It rolled for about 8 seconds and ended up right and past the hole.

He wasn’t the only one impressed.

“I thought the shot he hit on 16 yesterday – the low-flighted, slice driver – was one of the coolest shots I’ve ever seen,” Colt Knost, a former player and a host of GOLF.com’s Subpar podcast, said during Saturday’s broadcast of the third round.