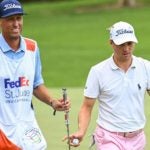 Justin Thomas and Jim "Bones" Mackay already have a win under their belt, but that shouldn't change how we view the newly formed tandem heading into the PGA Championship.

Ed. note: We’ve heard the chanting outside our windows, at odd hours of the day and night, so here it is: the first of eight installments of Bamberger Briefly, PGA Championship-style.

We’ve all been wondering the same thing: With Jim “Bones” Mackay on Justin Thomas’s bag, doesn’t that make him even more of the man to beat this week?

Bones caddied for Phil Mickelson when he won a PGA Championship. Bones caddied for Justin Thomas when Thomas won last week in Memphis. But he’s filling in for a caddie, Jimmy Johnson, on the IR list for now, who won a bunch with Nick Price and Steve Stricker and others. Whatever Thomas wants from a caddie, Johnson is giving it to him. The proof is he’s had the job for Thomas’s entire professional career, pretty much. Whatever Thomas needs from his caddie this week, Bones is going to give it to him.

Will the dynamic be different? Of course. The mystery of human connection. But Bones will do, in his way, exactly what Johnson would have done, had he been able to work this week: help Thomas play the best golf he can.

I went to my first PGA Championship in 1985, as a caddie, working for a New York club pro named Kevin Morris. Kevin was a short hitter but a good putter and that was an acceptable combination at mile-high Cherry Hills. (I stayed in a dorm room at the University of Denver for $5 a night and took a bus to work.) Andy Martinez, Johnny Miller’s caddie, took Kevin in the caddie High Pool, where you won big bucks by picking the player with the highest 36-hole score. Kevin made the cut by two shots.

In his fifth PGA Championship, he had made his first cut. We talked over a lot of shots, but I didn’t play a single one. I would say I helped Kevin play the best golf he could that week. He shot 301, 23 shots behind Hubert Green’s winning score. That was damn good golf, Kevin’s 301 and Hubert’s 278. Both of them played about as well as they could.

Jack Nicklaus, as every child knows, has 18 major championships, five of them PGA Championship titles. His wins came in 1963, ’71, ’73, ’75 and ’80. The winning caddie was not part of the discussion in those days. In fact, for much of Jack’s career, players had to take local caddies at the PGA Championship, among many other summertime tournaments. Angelo Argea, Nicklaus’s longtime caddie, didn’t win a major with Jack until the ’75 PGA, even though they had been together for long over a decade before that. Now the caddie is a topic. That’s OK. Golf is a good thing to talk about. It has many veins. The caddie-player relationship is one of them.

Matt Kuchar’s caddie, John Wood, is an astute observer of the golf scene. He says that Tiger’s 18 wins in World Golf Championship events — no cut events with limited fields — is one of his most underrated accomplishments. I think I am finally getting that. He didn’t beat a large number of golfers in those weeks, but the WGCs gather the best players in the world. Nicklaus beat scores of club pros, like Kevin Morris, in his five PGA titles, players who could virtually never beat him over 72 holes. But he also had to beat (at different times) Billy Casper and Arnold Palmer and Gary Player and Tom Watson and Lee Trevino and Hubert Green and Lanny Wadkins.

Wadkins won the ’77 PGA at Pebble Beach. I have thought — and I have never found anybody to agree with me except a lukewarm Wadkins — that it would be great to have the PGA at Pebble Beach every year, in late February or early March. The lousy weather would be part of it. The AT&T tournament would be folded into it. Well, at least this year the PGA Championship is in the leadoff position, as it was in 1971, when Nicklaus won. (Angelo wasn’t on the bag; Nicklaus’s caddie that week was a PGA National pro named Floyd Young.)

Some years later, Angelo summarized his work with Nicklaus thusly: “He asked me to do two things. When he’s not playing well, one, remind him that he’s the best golfer out there. And two, that there’s plenty of holes left.”

In his own way, that’s pretty much what Joe LaCava does for Tiger. It’s always interesting, watching two people interacting with some meaningful thing on the line. Caddie-player. Husband-wife. Doctor-patient. Pitcher-catcher. This is a big week for Bones and JT.

It will be a big week for Shawn Warren, a club pro in the field. Shawn is from the Falmouth Country Club in Falmouth, Maine, and he’s bringing a buddy to caddie for him, Shawn McGurdy. Shawn-and-Shawn. Everything JT and Bones will go through this week Shawn and Shawn, in their own way, will experience, too. Shawn will hit the shots. Shawn II will help the cause as best he can.

Michael Bamberger may be reached at Michael_Bamberger@GOLF.com.