Jordan Spieth threw his ball into Rae’s Creek. He tells the funny story why 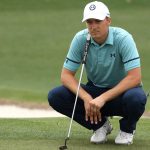 Jordan Spieth during Friday's second round of the Masters at Augusta National.

When you’ve gauged your yardage and wind correctly, swung your iron wonderfully and putted perfectly, as Jordan Spieth believed he did Friday on the 155-yard, par-3 12th at Augusta, there really is only one suspect remaining.

Spieth, during the second round of the Masters, hit his short iron, stared his ball down even, then heard only a low, “Ohhhh.” It had caught the front edge of the bunker. Spieth looked ahead for a few seconds, looked down dejectedly and looked up again before handing his club back to his caddie, Michael Greller.

“I hit a really good shot in,” Spieth said. “It hit in the lip of the bunker about one pace from being a good-looking birdie.”

From there, he said, his ball had dribbled back into a bunker rake print, and he was forced to play it as if it were plugged. He’d punch it out to about 6 feet, where, as it would turn out, the ball would commit its last sin.

Spieth missed the par putt just to the right of the hole.

In nearly one motion, he’d quickly walk to tap it in, grab it from the hole with his right hand, take five steps, move the ball to his left hand and toss it into Rae’s Creek.

They had a good run, this golf ball and Spieth.

But why did it have to end seemingly without warning, Jordan? Could the ball have done anything differently? Couldn’t you have talked things out?

“I don’t want to look at that golf ball anymore, so it goes into the water and then I go to another ball.”

Golf balls on the market, you now know what Spieth is looking for in his next relationship.