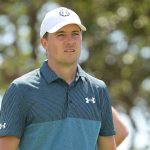 After a bounce-back 68, Jordan Spieth is seven back of leader Phil Mickelson.

This Week in Spieth lives.

Turns out, four over par through two rounds was more than our man needed to make the cut. (The fives kept playing, too.) Which meant that Jordan Spieth could play in a Saturday twosome, in this third round of this 103rd edition of the PGA Championship, the lone major señor needs to become the sixth man to put the career grand slam on his CV.

There are three active players who need one more major to join the club. They are:

Phil, who gets another crack at his missing piece, the U.S. Open, next month at Torrey Pines;

Rory, who gets another crack at his missing piece, the Masters, next April;

The Rt. Rev. J.A. Spieth, who gets another crack at his missing piece here at the Ocean Course on Sunday, in the fourth round of the PGA Championship.

The 2022 PGA Championship will be played at Southern Hills in Tulsa, Okla. This Week in Spieth may resume there, if there’s sufficient demand. The 2022 PGA Championship, by the way, had been scheduled for Trump National Golf Club in Bedminster, N.J., where Spieth won the U.S. Junior boys title in 2009, but the PGA of America changed the venue in the aftermath of the Jan. 6 attacks on the Capitol Building.

Years ago, Mickelson had a corporate day at Trump Bedminster with one of his sponsors. According to the course’s owner, Donald Trump, Mickelson called afterward and left a voice mail raving about the practice facilities. Trump expressed frustration when his assistant could not immediately replay the recording.

A more successful recording session that links Phil and Jordan came after the third round the 2019 BMW Championship at Medinah. It was there and then that Mickelson put on his World Golf Hall of Fame blazer and recorded, in the club’s manly locker room, a Phireside with Phil interview with Spieth, his fellow Masters champion. Mickelson asked Spieth to tell the story about Mickelson’s Kreskin-like ability to will putts stroked by his playing partners out of the hole. Spieth asked Mickelson to cool his jets on the whole thing.

Well, you know what we say, here at This Week: what goes around comes around. Whatever that means.

To which one could say: whatever any of this means.

The question mark is silent.

Everybody knows that Spieth is hyper verbal. It’s part of his appeal. A reporter noted that Spieth was born the year Mickelson first played in a PGA Championship. (Spieth was born on July 27, 1993. Six weeks later, on Aug. 15, Mickelson played his fourth round of his first PGA, in which he finished in a tie for sixth.) Spieth was asked for his impressions of Mickelson’s long career. Sayeth Spieth:

“Yeah. It’s Phil. Right? It’s theatre. I don’t watch golf but I promise you I’m going to turn it on to watch him today. It’s pretty incredible. I have no way to relate to it, but I also don’t think it’s necessarily that special. Didn’t he win a World Golf Championship in the last couple years?”

He did, in 2018. Mickelson won in Pebble Beach the following year.

“So he’s been competitive. And I know he’s talked about how he’s been less competitive here versus the Champions tour. And that it’s just been getting harder. But the guy’s got four good rounds in him on any golf course, and no one would bet against that. And what he did in the wind, last two days, with his accuracy struggles, to carve it into these fairways? And to be gaining strokes on the field and to shoot those scores in the conditions we’ve had? That’s pretty awesome.”

Spieth said that Sunday’s wind, expected to be completely different from Saturday’s wind, will favor a lefthanded golfer.

Always thinking and often talking, to himself as often as not.

When he lipped out on the 6th hole on Saturday, he said, aloud but to himself, “That’s my 11th lip out this week.”

Here at This Week in Spieth we believe in onward and upward. You know, like what a 65 might do for the man in the fourth round of this 103rd PGA Championship in which he attempts to become the sixth player to complete the career grand slam.

Look for Spieth to hit a lot of drivers in the fourth round, en route to something crazy low.