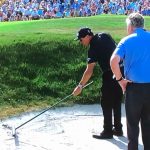 Phil Mickelson rakes the sand on Saturday before his third shot on the 9th hole at the Ocean Course at Kiawah Island.

Phil Mickelson, from left of the green on the 514-yard, par-4 9th at Kiawah Island, grabbed a rake and cleaned the sand that was around his ball.

Before he hit. Not after.

And he argued he was doing so to worsen his lie.

In a rare rules situation during Saturday’s third round of the PGA Championship, Louis Oosthuizen, Mickelson’s playing partner, hit into the “sandy area,” then Mickelson did, his ball landing about a yard to the left of Oosthuizen’s. (All sand at this year’s PGA, including sand that appears to look like a bunker, is considered part of the general area, and players can ground their clubs and take practice swings.) Oosthuizen’s right-handed stance bumped into Mickelson’s ball, and a rules official was called over.

“So my ball’s in his stance,” Mickelson said to the official. “Do I just mark it and recreate the lie, is that correct?”

It was. Mickelson then asked whether he could move the mark itself if it were in the way.

“It’s like you’re on the putting green,” the official said. “Just mark it, and then if you want, move it a couple clubheads over.”

Mickelson marked his ball, Oosthuizen slightly dug his feet into the sand, and he hit, from 63 feet away, to 2 feet. It was then Mickelson’s turn.

“Exactly where it was,” the official said as Mickelson placed his ball.

“The ball’s in the right spot,” Mickelson said. “But having to get the lie back …”

The official came into the bunker. Oosthuizen’s footprint had burrowed maybe an inch behind Mickelson’s ball. Mickelson would argue that improved his lie — and now he wanted to worsen it.

“It’s a better lie because I can get underneath it,” he said.

After further explanation, the official handed Mickelson the rake, and Mickelson would carefully clear up the footprint. From 64 feet out, he then hit to within 3 feet, and he and Oosthuizen would make their pars.

“Phil is saying I don’t want that dent behind the ball,” analyst Nick Faldo said on the CBS broadcast.

As Mickelson then walked to the 10th, off a front-nine 32 and in the lead, he gave the ball to a young girl.