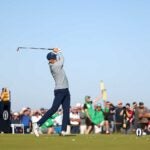 After a second-round 67 at The Open, Jordan Spieth is set to make a run at his first major title since 2017.

Jordan Spieth’s swagger is back.

Gone are the lost days of struggle as Spieth battled his swing and his mind in an effort to recapture the magic that made him golf’s golden child. At Royal St. George’s, he’s been flagging his irons and walking in putts. It feels like the summer of 2015 all over again.

Through 36 holes at the 2021 Open Championship, Spieth has played beautifully. His 132 total has him at eight under, and he trails leader Louis Oosthuizen by three. No matter, the 27-year-old is in just the position he wants.

“I’m pleased with where I’m at in the tournament,” Spieth said. “I don’t need to do anything differently. I like where I’m at striking the golf ball. I just need to hole a few more putts.”

Although an unpredictable two-way miss was Spieth’s bugaboo during the slump, the only thing that held him back on Friday was his putter. He carded five birdies during the second round, but a number of putts flirted with the cup before staying above ground.

Spieth’s day started as well as he could’ve hoped. He carded a pair of 3s to begin his day and closed the gap on then-leader Collin Morikawa with ease. A hiccup at the 3rd momentarily stalled Spieth’s progress, but he bounced back with a birdie at the 4th. A special day looked to be in the cards.

But he never could recapture that scoring magic. Spieth gave himself plenty of looks around the greens, but the flatstick did not cooperate and birdies were difficult to come by, with only two circles on the card over the last 14 holes.

Still, other indicators are encouraging. Spieth is controlling the ball with ease. Thanks to a new “turn and burn” swing thought, the threat of a big miss is negligible. Plus, the artistry of links golf keeps him mentally engaged more than on any other stage.

“It brings a lot of the feel aspect into the game,” he said Thursday. “There’s a lot of external factors over here, and I think that external is where I need to be living.”

Louis Oosthuizen is the 36-hole leader after a record-setting first two days at Royal St. George’s, but his track record for closing out majors is less than sparkling. The 2010 Champion has been a factor in a number of majors since that triumph, but he’s not added to his trophy case since. Oosthuizen also has the unfortunate distinction of holding the runner-up grand slam — second place in all four of the big ones.

If there’s a contender Spieth wants to be chasing, Oosthuizen would likely be on the short list. The young star Collin Morikawa also stands between Spieth and the top of the leaderboard, but this is his first start in an Open Championship. Not that being a rookie has stopped him before (see: 2020 PGA Championship), but a win for Morikawa would be unprecedented.

If you’d asked Spieth a year ago if he expected to be contending in a major anytime soon, the answer likely would have been no. But at Royal St. George’s, circumstances are falling into place for him to not just contend, but win.

All that’s left to do is make a few more putts.

“It’ll be a fun test this weekend as it dries out,” he said. “[I’ll] just keep doing what I’ve been doing and then try and make a few more putts.”