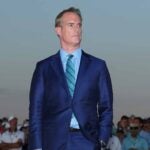 Joe Buck will debut in the booth for ESPN at the PGA Championship.

For the first time since the 2019 U.S. Open went off the air at Pebble Beach, Joe Buck will be returning to men’s major championship golf.

The 53-year-old sports broadcaster will be making his ESPN debut at the PGA Championship in just two weeks, as was first reported by Andrew Marchand of the New York Post and later confirmed by the broadcaster himself. Buck’s debut will come alongside Michael Collins as part of a “Manningcast” style telecast that will lead the network’s coverage on Thursday and Friday from Southern Hills.

The unbuttoned, interview-driven “Manningcast” attracted major stars (and drew rave reviews) during football season. This time, Buck will not be joined by either of the Manning brothers but rather by Collins, otherwise known as the “ESPN Caddie,” who spent 10 years as a professional caddie (and 20 as a stand-up comedian) before working as an analyst for the network.

According to Marchand’s report, the broadcast will be produced by Omaha Productions, the company Manning helped create. Buck and Collins’ telecast will air for the first hour of ESPN’s Thursday and Friday PGA Championship coverage, before taking over an early morning slot on the weekend days, which are broadcast by CBS. After the early morning slot, it will transfer over to ESPN2 and ESPN+.

The event will be Buck’s first since leaving his longtime employer, FOX Sports, as part of the most active sports broadcasting “offseason” in NFL history. Buck was one of a handful of network shakeups in 2022, leaving FOX with his partner, Troy Aikman, in favor of a new contract and the Monday Night Football job at ESPN.

But his debut for the network will come in golf, a sport in which he has become a self-professed junkie. Away from the broadcast booth, Buck is a single-digit handicap who plays incessantly in his free time. In the booth, he’s just as committed. Back in 2013, Buck was tasked with leading FOX’s golf coverage as part of a decade-long deal with the USGA. He called a handful of U.S. Opens (and close to two-dozen other USGA Championships) in the few years before the network prematurely cut loose its golf deal.

FOX’s coverage of the USGA, and Buck by extension, came under close scrutiny from golf fans wary of a new regime. After a much-maligned opening at Chambers Bay in 2015, the network earned high marks for its tech-savvy and speed (much of which has since been borrowed by its broadcast competitors, CBS and NBC). Buck himself earned mixed reviews from the golf public but was beloved by FOX’s behind-the-scenes crew, some of whom are following him to Southern Hills.

At the PGA Championship, Buck will make good on his hope to get back into golf. Of course, the return will come without the panache of FOX’s golf coverage, but also without many of the same pressures. Though, in Buck’s own words, that was never much of an issue.