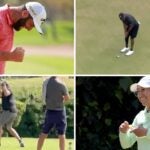 Welcome back to the Monday Finish, where we’re wondering what other golf matches should be live-streamed to the news via helicopter…

Cameron Champ won the 3M Open last July. He didn’t notch another top-25 finish for another eight months. What did he do in the meantime? First he battled injury. Then he recovered from injury. Then he shook off the rust. And now, it appears, he’s feeling like himself again.

“My game has felt good. I’m in great spirits in the head, in life,” Champ said on Saturday at the Mexico Open.

Champ entered Sunday’s final round in a share of second place, trailing only Jon Rahm. And while a triple-bogey 7 on the 8th hole doomed his chances, he battled back to finish T6. Champ finished T10 at the Masters in his most recent start before this, which means he has now logged back-to-back top-10s on Tour for the first time since 2018 and just the second time in his career.

So what, exactly, has Champ in such a good frame of mind? He credited a hard reset and time away from the Tour during his injury recovery.

“We just did stuff on my farm, on my property, I had nothing else to do. I couldn’t touch a club for eight, 10 weeks, 10, 11 weeks,” he said. He and his wife own a farm about an hour north of Houston. “We have cattle, we have horses. My wife rides horses, she got back into that. We got it all, chickens, goats, you name it. Yeah, it’s our little oasis at home and we love it.”

Champ says they have 30 acres and are acquiring more. Keep finishing inside the top 10? Farm expansion shouldn’t be an issue.

He hadn’t won since last year’s U.S. Open, which seemed wrong given Rahm had never really stopped feeling like the best golfer in the world. So it was important for Rahm to hang onto the lead on Sunday at the Mexico Open, reestablish himself as a closer and plant his flag as a wire-to-wire alpha-dog winner.

With the victory, Rahm cut Scottie Scheffler‘s lead at world No. 1 to 1.6 points (9.8 to 8.2) which is, well, still pretty significant. Winning the Masters goes a long way. But this was a big-time statement victory for Rahm. He was dominant off the tee, gaining more than five shots on the field and leading in driving distance. And he was solid everywhere else, shoring up a shaky putter for a one-shot win.

He was greeted on the 18th green by his wife Kelley and son Kepa. He shared with the media the example he hopes to set for his son:

“Yes, I might let some anger out and I might say some things, but I’m always hopeful and I’m always positive. That was key today. I never lost faith, I never lost my approach and my confidence and that’s why I got it done.”

The 31-year-old hadn’t won since the 2018 Portland Classic — and had started to wonder if it that win would be her last.

“I wasn’t sure if this would ever happen again, if I’m being perfectly honest,” Marina Alex said post-round. “It’s been tough. We’re all getting older. I’m getting older. There are so many amazing players out here. The competition is really, really difficult.”

Alex has been battling a herniated disc in her back. She closed hard on Sunday, firing a five-under 66 to eliminate a three stroke deficit at the Palos Verdes Championship.

“So, I just didn’t know if my mind and body were going to put me back in a position that I was going to be able to do it again. Today was the day.”

On the Ladies European Tour, Swedish rising star Maja Stark finished off a five-stroke victory at the Women’s NSW Open to claim her third win in nine career starts on the circuit and add to her lead atop the Race to Costa Del Sol rankings.

What a day to be a Spanish golfer! As Rahm was gearing up for his victory in Mexico, 27-year-old Spaniard Adri Arnaus was grinding through a playoff marathon at the Catalunya Championship. After he and opponent Oliver Bekker each made par on the 18th hole five consecutive times, Bekker blinked first with a bogey and Arnaus finished off a three-footer for his first career DP World Tour win.

No trophies, but still…

Tony Finau’s irons were spectacular in Mexico, finishing second in strokes gained approaching the green. He was terrific around the greens, too, ranking fifth in scrambling. He putted well on the weekend, too. In all, this felt like a massive step forward for Finau, who hadn’t logged a top 10 since his win at the Northern Trust last summer.

“I haven’t had a great season and just sometimes it’s just how it goes. It’s the game that we play,” he said post-round, ever the optimist. But he was clearly pleased. As he should be.

Some runners-up would rue being so close to victory. Not Kurt Kitayama, who logged his highest-ever PGA Tour finish at T2.

“You’ll just, you know, be thinking about it all night if you do that. I just let it go and happy where I finished,” he said.

After the way last week ended — she fell from contention with a quadruple-bogey 8 on Saturday and an uncharacteristic 75 on Sunday — Jin Young Ko needed a bounceback week at Palos Verdes. She nearly won in the process. A final-round 66 left her in solo second, just a shot behind Alex.

She went viral for a video you can see at the bottom of this post, but Lydia Ko also finished T3, just two shots off the lead, and gave a solid charge into an eagle attempt from the rough at No. 18. Ko just turned 25 and, asked to reflect on the moment, had some succinct wisdom for her younger self.

“You’re going to win some, you’re going to lose some,” she said. “Some losses are going to be wins as well. So just enjoy the journey and, yeah. Quarter of a century. Here I am.”

Tiger Woods is back.

Tigermania returned in the form of plane-tracking, paparazzi-photographing and even a live shot via helicopter as Woods headed to Tulsa, Okla., to begin preparations for the PGA Championship at Southern Hills.

Post-round interviews with Southern Hills’ director of golf Cary Cozby — who accompanied Woods throughout the round — revealed that the 46-year-old’s celebrity very much endures.

“The golf shop’s right off the first tee. So there were probably 20 members that slipped out there to watch him. He didn’t look up, hit his shot,” Cozby told SiriusXM PGA Tour Radio. “Second hole, there’s a helicopter. Fourth hole, there’s 50 to 70 people up on the hill overlooking that hole. And by the time we get to six there’s 30 to 40 people in the trees across the street with television cameras and phones and pictures, and [saying] ‘We love you, Tiger. Go get ’em, Tiger. Great shot, Tiger.’ Just amazing.”

Cozby added a few interesting notes about his prep work.

He said Woods is essentially a lock to tee it up in two weeks’ time. He was generally optimistic about his game, citing Woods’ speed, distance, rhythm and touch around the greens. He acknowledged that Woods showed some signs of fatigue later in the round, and video confirmed Woods is still walking with a hitch — one that he has confirmed is unlikely to ever really go away. Cozby added that he thinks Woods could contend at the PGA.

What else did we learn? I wrote about this last week but big-picture the takeaway is that we’re about to see his plan play out. When Woods was blueprinting his return he described a Ben Hogan-style limited schedule. And while the Masters felt like a miraculous one-off, it was actually the beginning of the execution of said plan. Get ready for more Tiger.

We also learned that Woods will have to deal with a tiny amount of feedback from the Tulsa faithful after he poked fun at the city’s offerings in an impromptu interview with Phil Hellmuth at Tiger Jam over the weekend. Asked what else is going on in Tulsa, Woods took the bait. “Not much,” he said.

We’re inclined to give him a pass here. This felt like a bit of an ambush interview, and perhaps Woods hasn’t been briefed on the Tulsa Drillers’ various nightly offerings. He may not even know about the acclaimed Tulsa Zoo. I’m going to go out on a limb and suggest he’ll receive a warm welcome anyway.

Rumors on Phil Mickelson and other LIV-curious golfers.

Now that Phil Mickelson has been spotted at multiple San Diego-area golf clubs in the past week, it’s time to officially wonder what it is he’s prepping for.

Mickelson’s agent Steve Loy has confirmed that he has gotten paperwork ready for the PGA Championship, the LIV Golf opener in London and the U.S. Open. But where will we see him first?

Sure, the PGA Championship would seem like a logical spot. He’s the defending champ, after all. But from what I’ve heard, his attendance at Southern Hills is far from a sure thing.

As for other golfers interested in LIV’s offerings? The Guardian is reporting a list of interested players that includes a slate of European Ryder Cup stars including Lee Westwood, Ian Poulter, Sergio Garcia and Graeme McDowell — plus other big names including Louis Oosthuizen, Branden Grace and Richard Bland.

The next lines drawn will come from the PGA Tour and DP World Tours when they decide to grant — or not — releases for the London event in June, leaving players to decide whether they’d hold back as a result or go play anyway. (The PGA Tour has a potential out where they’d grant releases for the first event but cease doing so once LIV arrived in North America in July, which would more clearly violate its regulations.)

What’s next? Some combination of drama, litigation and dramatic litigation.

Gold Mountain, the Bremerton, Wash., municipal complex just over an hour away, is a revelation. Thirty-six holes in woodsy paradise. More to come on the subject.

Viewers loved Lydia Ko‘s transparency when asked about the medical treatment she got out on the course — even if it caught interviewer Jerry Foltz off-guard.

“It’s that time of the month. I know the ladies watching are probably like, ‘yeah, I got you.’ So, when that happens my back gets really tight and I’m all twisted. It’s not the first time that Chris has seen me twisted. I felt a lot better after he came.

“Yeah, there you go. I know you’re lost for words, Jerry. Honesty it is.”

Rory McIlroy won’t be defending his Wells Fargo title at Quail Hollow, where he won last year. But he’ll be leading the field at TPC Avenel Farm nonetheless.

Check out that curly flow!