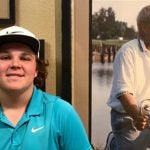 John Daly's son recently played on a course very special to his dad.

If you didn’t know that John Daly has a son with some big-time golf game, well, now is the time to get on board.

The two-time major champ and fan favorite recently checked in with TMZ to talk about his son’s game, fresh off John Daly Jr.’s runner-up finish at an elite junior event last week. Daly Jr. was tied for the 36-hole lead at the Dye National Junior Invitational and tied for second place after a final-round 76, which was four back of winner John Marshall Butler. The tournament was held at Crooked Stick in Carmel, Ind., which was the site of his dad’s major breakthrough in 1991. John Daly got into that year’s PGA Championship as the ninth alternate and won.

“I played great,” Daly Jr. told the Indianapolis Star. “It would have been cool to win, but I still have time. Just a couple bad three-putts both days, but other than that I played great.”

“He loved the course, Crooked Stick, man,” Daly Sr. told TMZ. “He loved it. I said, ‘You’re going to love it, you can fly all the trouble.'”

That’s because Little John, at just 16, can already hit it farther than his dad, who was for years one of the longest hitters on Tour.

Asked if he has the potential to have a career like his dad, Daly Sr. said “he’s got it in him.”

“We’ll see how college goes,” he said. “He hits it, man, he’s got that sound. That sound of a swoosh in basketball or the perfect pass, post pattern, or that tennis racquet hitting it solid every time. He hits it solid every time. It’s a sound that a lot of people in golf don’t have and he’s got it. He’s had it since he was about 8.”

Big John added that his son started beating him last year. They hit from the same tees and don’t give each other any putts. Competitive? Absolutely.