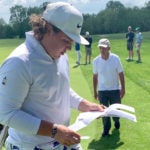 John Daly Jr. walks off the green on Tuesday at Crooked Stick.

This might sound familiar. John Daly’s son, John Daly Jr., is tied for the tournament lead after 36 holes in the Dye National Junior Invitational. But here’s the really familiar part: it’s being played at Crooked Stick in Carmel, Ind. — the same place his dad triumphed as the ninth alternate to win the 1991 PGA Championship.

The victory launched Daly’s career and now, nearly 30 years later, his son is in contention to win there as well.

Daly Jr. is tied for the lead with four others at even par. According to the Indianapolis Star, he lipped out an eagle putt on his final hole on Tuesday that would have given him the lead. (The Star reports that he declined to be interviewed after his round.) The inaugural event features 66 of the top high school players in the country (33 boys and 33 girls).

Daly Jr. is a high school junior and lives in Clearwater, Fla., and he’s played with his dad before in the PNC Father/Son Challenge. Big John recently discussed his son’s game on GOLF’s Subpar podcast (video above), saying: “He’s become one hell of a ball-striker, and he’s hitting it past me now, which I’m OK with, but we still go at it. He’s playing the same tees as me now and we’re having battles.”

The final round concludes on Wednesday, and you can follow along here for updates. And yes, his is also following along.