John Daly is getting around the 2019 PGA Championship in unique style: he’s riding in a golf cart. The 53-year-old is negotiating the rolling terrain of Bethpage Black from the driver’s seat of a topless buggy. Why is he allowed to ride in a cart? Why isn’t anyone else? Here are some answers.

Why John Daly is allowed to ride in a golf cart

The PGA of America granted Daly permission to use a cart at Bethpage Black because of osteoarthritis in his right knee that he says prevents him from walking more than six holes at a time.

Daly filed his request under the Americans with Disabilities Act and is the first player to ride a cart in a major since Casey Martin in the 2012 U.S. Open.

Martin endorsed Daly’s use of the cart. “I’m happy for him because I know John a little bit and I know for certain that he’s not trying to get an advantage,” Martin told GOLF.com in a phone interview. “He just wants to play in a tournament he has a rich history in. He just wants to be part of the action. I’m grateful that he’s going to get that chance.”

Daly has a lifetime exemption into the PGA Championship thanks to a legendary title at 1991 at Crooked Stick.

Why Daly was nervous about fan reaction

When the news came out that Daly would take a cart, the Champions tour regular voiced his concerns about New York’s rowdy fans.

“I hope I don’t get a lot of grief from the fans,” Daly told the AP of the famously vocal Bethpage galleries. “My knee is screwed. I had the meniscus cut out. I have osteoarthritis so bad … I can walk up a hill, I just can’t walk down one.” 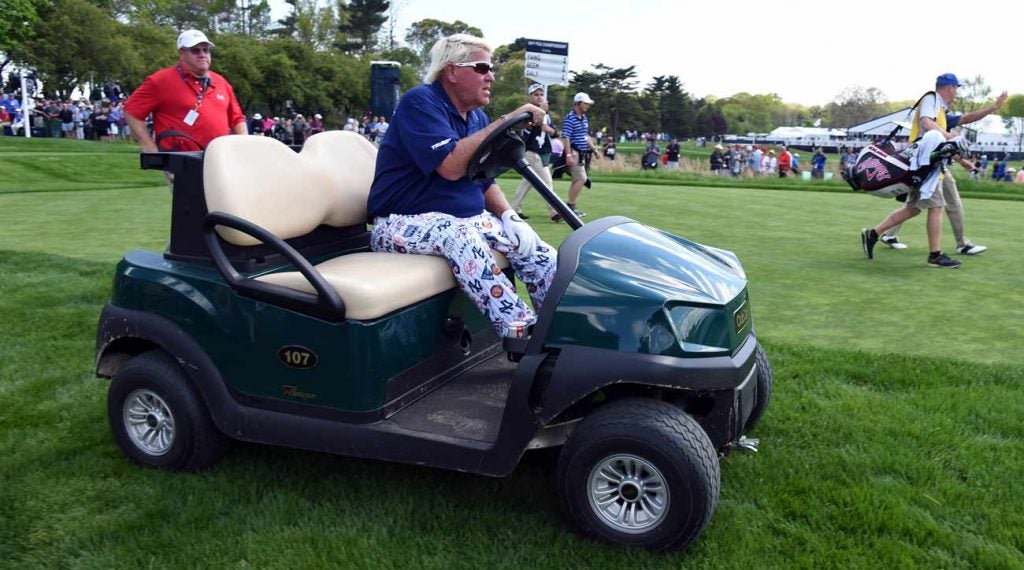 John Daly was granted permission to ride in a golf cart for the 2019 PGA Championship.
USA Today

Why Tiger Woods gave Daly grief about taking a cart

Tiger Woods has long been a fan of John Daly, and was more than happy to throw some shade his way when he heard about the cart.

“This is a bigger golf course, there’s a lot of property,” Woods said of Bethpage Black. “There’s definitely going to be a component to stamina as the week goes on, four days over a tough championship that is mentally and physically taxing takes its toll.

“As far as JD taking a cart? Well,” Tiger continued with a grin. “I walked with a broken leg, so…”

The comment quickly made the rounds across the golf world, and reached the ears of Daly. He expressed his dismay to USA Today on Tuesday, saying that he wished Woods had “all the facts” before speaking on the subject.

“Might have been a different comment,’’ Daly told USA Today. “As well as the Golf Channel Wednesday morning, when they bashed me pretty good, and a few others.”

Daly explained that the osteoarthritis in his right knee keeps him from trekking around Bethpage, particularly the downhills. “Osteoarthritis is a tough thing, brother. If my knee was broke, I would have had it fixed. But my situation is totally different. It’s painful as hell is all I can say. As was Tiger’s, I’m sure.”