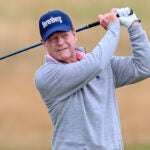 No wedges, no stretches: Watson starts his warm-up by hitting hybrids.

Tom Watson has 70 professional wins in his career, including 39 PGA Tour wins, eight major titles and 14 PGA Tour Champions victories. With so many wins over such a long period of time, it’s safe to say he’s a golfer who knows how to warm up effectively.

Warming up is a bit of a pet topic of mine. I study how pros do it, ask experts the best way to do it, and look closely at all the bits in between. Often, the advice I get back is to start with a few stretches before hitting smaller wedge shots before gradually moving onto bigger golf swings. It’s a good template for the rest of us, and one most pros follow.

But then on Monday, while on the grounds of the Berenberg Classic — a charity event hosted at GlenArbor Golf Club to raise money in the fight pancreatic cancer — I had my entire warm up worldview rattled. I watched Watson stroll onto the range, whip out his hybrid and begin bashing golf balls rapid-fire into the distance. No stretches, no wedges. He hit about 10 minutes of hybrids, then about 10 minutes more of drivers, before ending with a handful of shorter clubs and heading to the putting green.

If I saw an average golfer warming up this way I’d be outraged. Yet here was Tom Watson doing things seemingly totally backwards. How could this be? Turns out, it’s an intentional decision.

Watson has been starting his warmup sessions with a hybrid or long iron for years now, and not just for physical reasons. Sure, it helps get him looser, faster, but he says it also gives him a mental boost.

Which is why Watson employs a bit of reverse psychology and starts with the clubs that are the most difficult to hit.

“If I don’t hit the hybrid good then who cares? It’s a hard club to hit, and it’s the first swing of the day,” he says. “If I can hit [my hybrid] well without warming up, I know it’s going to be a good day.”

All of which is to say — and I never thought I’d write this sentence — that maybe starting your warmup with a hybrid might work for you.

Ready to overhaul your game? Find a fitting location near you at GOLF’s affiliate company True Spec Golf.