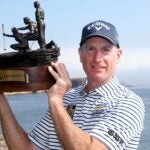 Jim Furyk has now won both of his Champions Tour starts.

Bryson DeChambeau’s brutal dismantling of Winged Foot was the center of the golf world’s attention last week, so plenty of other stories went unnoticed. Here are three you might’ve missed.

Will Zalatoris cashes a huge check

Will Zalatoris is leading the Korn Ferry Tour money list this season with $403,978 earned in 16 starts. Thanks to his T6 finish at the U.S. Open, he’s added to that total considerably. The $424,040 he made at Winged Foot is by far the largest check of his young career.

In addition to the nice payday, Zalatoris’ play also locked up his spot in the 2021 U.S. Open.

“It was a great experience,” Zalatoris said. “I’ve been playing well all year. I just found out that obviously top 10 gets us into next year too, so that’s obviously pretty exciting.”

If not for the coronavirus pandemic, Zalatoris would likely have his PGA Tour card by now. But with status being altered because of a truncated season, he will have to wait for his chance at the end of next season. If he keeps playing like he did at Winged Foot, he should have no worries.

Jim Furyk has played in just two Champions Tour events since becoming eligible back in May. He’s also got two victories.

“I feel honored,” Furyk said. “Two Champions Tour events, two wins — on a golf course I always wanted to win a golf tournament on: Pebble Beach … I feel very fortunate to come out on top.”

No one has ever won their first three starts on the Champions Tour, but Furyk will have that chance the next time he tees it up on the senior circuit.

Most 21-year-olds are concerned with how to juggle their college exams. Garrick Higgo’s problems were a bit different this past weekend as he battled the elements to claim his maiden European Tour victory.

Higgo shot a final-round 65, including a birdie on the 72nd hole, to best runner-up Pep Angles by a shot.

“It feels awesome,” Higgo said. “I thought it was going to be a little bit easier over the last three holes but [Angles] made it a bit tough. That birdie on the last was really, really nice.”

The win comes in just Higgo’s seventh start on the European Tour moves the South African to No. 122 in the Official World Golf Rankings.

“It does give me a lot of confidence,” he said. “It’s an awesome feeling to get it done.”