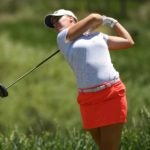 Jennifer Kupcho is only 23 years old, but she already has a long list of accomplishments in the game of golf. She won the 2018 NCAA D1 championship and held the top amateur ranking in women’s golf for a record length of time. Oh yea, she was also the first and, as of now, only woman to win a tournament at Augusta National (the 2019 Augusta National Women’s Amateur).

Kupcho made it through Q-school in 2018 to graduate to the big leagues. She deferred her membership until after the 2019 NCAA Championships, and then secured three top-10s in the 2019 LPGA season. Then the Covid-19 pandemic shut down the 2020 LPGA season after she’d played only one event, the Gainbridge LPGA at Boca Rio, where she finished T19.

But no matter, Kupcho still found ways to compete in pro golf during the LPGA’s hiatus. In early June, she stormed to victory at the Cobank Colorado Women’s Open, setting the scoring record by reaching 16 under in the three-round event at Green Valley Ranch Golf Club.

Not only was it her first official win in a pro event, but in light of her dominant performance, she was invited to play in the men’s Cobank Colorado Open this week, from July 23-26, only the second woman to do so.

Kupcho will be paired with her brother Steven during the first round, who is an accomplished player in his own right, having won a Dakotas Tour title two weeks ago with a final-round 62. They tee off at 2:35 p.m. ET alongside defending champion Sam Saunders, the grandson of Arnold Palmer who regularly competes on the PGA Tour.

The tournament will be played on the same Green Valley Ranch course outside of Denver where Kupcho won the Colorado Women’s Open, though the course will play considerably longer than it did in June. The tournament, which features a standard 72-hole format and a field of 156 players, is run by the Colorado Open Golf Foundation and supports the The First Tee of Green Valley Ranch.

When reached via text by Golfweek, Kupcho said, “Regardless of the outcome, I’m really just appreciative of the opportunity to raise the visibility of women in golf and am excited to get to play alongside the guys. I hope it opens some eyes, raises some questions and maybe even inspires others.”

If Kupcho ends up in the winner’s circle on Sunday, she’ll take home a $100,000 check for her efforts and earn an invite to all future Colorado Opens.

You can follow her progress at the Colorado Open with the live tournament leaderboard here. No matter how she fares, Kupcho will be back on the course again next week when the LPGA finally returns to action at the LPGA Drive On Championship in Toledo, Ohio.