J.B. outlasts JT as mentor takes down mentee to win at Riviera

PACIFIC PALISADES, Calif. — Golf instructor Matt Killen had to have been the most conflicted man in the state of Kentucky on Sunday.

As the instructor to Kentucky natives J.B. Holmes and Justin Thomas, he watched with great interest as his two pupils waged a back-and-forth Bluegrass battle on the Kikuyu grass fairways of Riviera Country Club. It required finishing with seven straight mistake-free pars in cold blustery conditions for Holmes to outlast Thomas (75) by one stroke and claim the Genesis Open for his first PGA Tour title since 2015.

“It was tough to watch,” Killen said. “I’m pulling hard for all of my guys each week.”

Killen has coached Holmes “forever,” and helped Thomas with his putting since his college days. He remembers how Holmes used to pull Thomas under the ropes during practice rounds at PGA Championships when Thomas was no more than 10 years old.

“I mean, that’s stuff I’ll never forget,” said Thomas when reminded of how Holmes served as a big brother of sorts. “I just never thought, you know 15 years later he would beat my ass at Riviera. That was a bummer.”

Holmes, 36, grew up a prodigy, who started swinging a club in his yard at home in Campbellsville, Ky., when he was 14 months old. He became good enough to make the six-man varsity squad at Taylor County High School – wait for it – in the third grade. In due time, Holmes qualified for the Kentucky state high school championship in seventh grade, made All-State in eighth grade, captured the state title his sophomore year, and led the team to two state high school championships.

But despite four PGA Tour victories and two appearances on the U.S. Ryder Cup team, Holmes had been surpassed as the state’s best golf product by Thomas, who played in his first Tour event, the 2009 Wyndham Championship in Greensboro, at age 16 and reached No. 1 for the first time last season before his 25th birthday.

For three rounds, Thomas, a native of Louisville, could do no wrong — well, with the exception of a shank at No. 9, but even that didn’t cost him as he salvaged par. He matched the 54-hole scoring record of 17-under 196. He handled the rain, the cold, the delays, and the early wake-up calls. No less than Tiger Woods trumpeted Thomas’s hot hand with the putter in cold conditions.

“He made everything,” Woods said. “He made tough conditions look easy.” 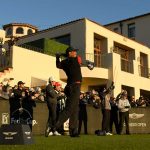 You may also like Tiger Woods ran out of gas this week, but make no mistake: Riviera now belongs to him

Thomas had gone to sleep on a one-stroke lead and stretched it to four after posting a six-under 65 early Sunday morning. At one point, Holmes’s caddie, Brandon Parsons, wondered if Thomas would get to 20 under. “I was like, ‘You mean this round?'” Holmes recalled saying. “He was playing unbelievable there that third round.”

But wind has always been regarded as golf’s great equalizer and when the conditions turned nastier, Thomas didn’t have an answer for gusting winds that were Tinseltown’s version of a winter Polar Vortex. Holmes made birdie on two of his first three holes of the final round and when Thomas committed a few early bogeys, he had surrendered a four-stroke lead in the span of five holes.

“Usually when the conditions are crappy I do better,” Holmes said. “You never know out here. This is a tough golf course and then you throw that kind of wind in there.”

High winds also led to unusually slow playing conditions. Holmes is notorious for playing at a snail’s pace and was called out both by television announcers and berated on social media. Afterwards, Adam Scott, the third player in the final group, didn’t hold back in his assessment.

“We know he’s generally a slow player. When you get conditions like this, everyone turns into a slow player,” Scott said. “It wasn’t affecting. I mean, it just takes a long time to get around.”

Indeed, the whipping winds caused havoc for the leaders on the inward nine. Holmes took the solo lead for the first time with a birdie at No. 10 combined with a three-putt for Thomas. But one hole later, they reversed order when Thomas made birdie and Holmes took three putts from less than 4 feet. Then came a critical moment at 13 when Holmes sunk a 12-foot par putt and pumped his fist, and Thomas missed from 8 feet and then lipped out the comebacker. It was a four-putt double-bogey that gave Holmes a two-stroke edge that he never relinquished.

“J.B. made a great putt there, that was a huge flip,” Thomas said. “I’m sure he would say that was probably the biggest turning point of the round for him.”

“He putted so poorly last week that I had him hit well over 100 putts from 3-5 feet,” Killen said.

It paid quick dividends. Holmes ranked first in that category at the Genesis Open. He made another clutch par putt from 12 feet at No. 16 to maintain the lead.

“We all should appreciate how good a job J.B. did out there today,” Woods said at the trophy presentation. “What a big up and down at 16.”

Holmes opened with a tournament-best eight-under 63 that included a hole-in-one en route to shooting a 72-hole total of 14-under 270. The victory also earns him an invite back to the Masters after failing to qualify last year. And for this day, Holmes the mentor showed his mentee he still has some game.