Tiger Woods ran out of gas this week, but make no mistake: Riviera now belongs to him

PACIFIC PALISADES, Calif. – Someday you’ll think of this historic Tour event here — the old L.A. Open at Riviera — as Tiger’s tournament. As Bay Hill is to Arnie and the Memorial is to Big Jack, this golfing get-together will belong to Tiger Woods.

The Riviera clubhouse, a stucco palace high on a hill, is a maze of hallways and stairways and rooms large and small, one of which is devoted to the life and Riviera times of Ben Hogan, who won three times at Riviera, including the ’48 U.S. Open. J.B. Holmes, your 2019 Genesis (née Los Angeles) Open champion, will get some wall space before the gang gathers here again in 2020.

It’s a kind of museum, really. There are paintings and portraits of Glen Campbell (the tournament host from ’71 to ‘83), Charlie Sifford (the winner in ’69) and T.C. Chen (’87). The club’s reigning Mixed Couples Scotch team of Sara and Keith Prokop are in a frame. Jim Murray, sportswriting legend, has a wall of his own. (Late in his long run, Murray wrote, “Golf is now a five-letter word. It’s spelled ‘W-O-O-D-S.’”) The only nod to Woods is a black-and-white snap of a grinning 16-year-old Tiger hanging on the second floor.

The man is still an excellent golfer. Woods shot a third-round 65, a score bettered by nobody. Had he shot a fourth-round 65, he would have finished a shot behind the winner. Not that that is any sort of consolation to the player with a Tour-record 80 wins. Yes, that’s an underground protest to Sam Snead’s declared total of 82. A few of them are kind of funky.

Instead Woods shot a fourth-round one-over 72 on this majestic course, thought by many to be the best the gents play all year (though there are certainly two excellent courses in Georgia, too). Nobody was going to sniff 65 in Sunday’s cold and wind, with odd moments of spitting rain and bright winter sunshine. Woods had to get up in the middle of the night to make it to his 6:45 a.m. tee time. He walked with his hands in the deep pockets of his rain pants and looked worn-out.

Nicklaus will tell you, it’s not easy being a tournament host, though Nicklaus won his event, at a course he co-designed, Muirfield Village, in Dublin, Ohio, in its second playing, in 1977, then again in ‘84. Palmer never won at Bay Hill. Both men owned homes on their courses. Makes for an easier morning commute. Tiger is not a homeowner at Riviera. 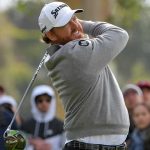 You may also like The 30-second guide to the Genesis Open: Who won, best shot, best storyline and more

Woods has won at Bay Hill eight times. (That’s crazy!) He’s won the Memorial five times. One win at Riviera would be so excellent. He grew up about 40 miles south of here, pretty much a straight shot on the 405. But those 40 miles might as well be a million. Bay Hill, the course and the development, was built in Arnold’s image. Muirfield Village, course and houses both, reflects Jack. But you wouldn’t say that of Tiger and Riviera.

The course, yes. It’s a George Thomas classic and Woods likes it as much as he can like any course that has yielded no wins for him. But the club is flashy. It’s Westside L.A. Tiger really doesn’t do look-at-me. It’s been said a thousand times: He likes to let his clubs do the talking for him.

But when you are your sport’s dominant figure, you’re required to talk. And when you’re the tournament host, you have to talk more. Woods talked on Monday, after his nine-hole celebrity thing. He talked on Tuesday, during an afternoon nine-hole practice round. He talked on Wednesday, when the Tour announced the elevation of this event to Bay Hill-Memorial status. He talked on Friday when he finally got off the course at dusk. Ditto on Saturday. On Sunday afternoon, waiting to talk to Dottie Pepper of CBS Sports, he sat on the hood of a soiled work golf cart, coffee in hand. You almost never see Woods sitting in public, except at a sit-down press conference, on a dais.

“I’m tired,” he told reporters later. “The weather, the long days, the temperature, trying to be focused for long periods of time — it took a toll on a lot of us out there today. Well, quite frankly, this entire week.” Quite frankly, indeed. He described being on the course before the sun was up and after it went down.

Next year, the event will have only 120 players. That’s a shame for the 36 players who will lose a chance to play, but it will make for a tournament that’s easier to manage, just as the flagstick-in-the-hole makes watching putting easier for fans to follow. It was half-shocking to see Woods do it, now and again, when putting from downtown. No Joe. A naked flagstick.

What was not shocking was to see Woods grind-out that fourth round. That’s what he has always done. As Johnny Miller used to say, that’s good training for you junior golfers out there. You just never stop trying. Why? Because it’s important, and it’s good practice. That is Woods’s starting point. His golf is important. He shot 278; 277 would have been better. But at least he didn’t shoot 279. There’s money, FedEx points, Presidents Cup points riding on every swing and shot. More than that, there’s the discipline of consistency.

When spectators arrived at Riviera, they were greeted by a billboard promoting the Earl Woods Scholarship. Every sign person (sign boy in a less sensitive time) wore a bib with the logo of the Tiger Woods Foundation on it. When an excited Jay Monahan, the Tour commissioner, spoke of this tournament’s new “elevated” status at a press conference on Wednesday, you could almost see the adrenaline oozing out of his skin.

Yes, this is J.B. Holmes’s event, this year. Tiger was on the 18th green with him Sunday night, and maybe they’ll be together in December, when Woods is the U.S. Presidents Cup team captain. So Holmes wins the make-believe race to the clubhouse wall, as a Riviera champion. But this event will belong to Woods for the rest of Tiger’s life, and then some.