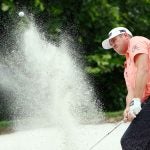 Jason Kokrak hits out of a bunker on Sunday on the 7th hole at Colonial Country Club.

Jason Kokrak, as far as we can tell, is a good guy. The 36-year-old’s grinded out a solid PGA Tour career. On Saturday at the Charles Schwab Challenge, he wore a colorful shirt decorated by watermelons. But after his third round, Kokrak knew he’d be a villain on Sunday. One stroke ahead of him at Colonial Country Club, in Fort Worth, Texas, was Jordan Spieth, of Dallas, Texas. And Kokrak’s from … not Texas. (He’s from Ohio.)

“Jordan birdied 13, the par-3, and I walked off the green, [and] I was like, ‘Well, I’m definitely not the favorite here this week,”” Kokrak said.

“He’s a Texas guy. I’m an Ohio guy. It’s fun. The crowds are crazy. But it’s fun to have a local kid and play well and him be in the last group, and I’d be more than happy to spoil it for him tomorrow.”

The eyes of Texas may have a few tears this week.

Behind a three-birdie-over-six-hole stretch, Kokrak shot an even-par 70 on Sunday for a 14-under total and a two-shot victory over Spieth. No other player was closer than four strokes. It’s Kokrak’s second Tour victory, following his win at the CJ Cup last October.

The tournament swung after a throw.

Kokrak would work his way to a one-shot lead a third of the way through Sunday’s round, only to take two shots to get out of a greenside bunker on the 434-yard, par-4 7th and bogey the hole. He’d pluck his ball out of the cup, then toss it away. Naturally, there were a few claps from the pro-Spieth contingent.

On the 377-yard, par-4 17th, after two straight bogeys that dropped his lead to a stroke, Kokrak dropped a 7-footer to exchange pars with Spieth. Then on the 435-yard, par-4 18th, Kokrak two-putted for par, while Spieth hit his approach into the water left of the green.

Kokrak, after not winning over the first 200-plus tournaments of his career, has now won twice this season, and his game makes him a favorite for more. The Spieth resurgence, meanwhile, continues, despite a few hiccups on Sunday.

“A couple of comments I didn’t appreciate coming down the stretch, but naturally you’re going to pull for the hometown kid. I appreciate it. I appreciate the gamesmanship. Jordan was amazing all day. He’s a true champion and he’s won multiple times and is an incredible player. I’m glad to be standing victorious above a guy that’s so good.” — Kokrak on the pro-Spieth crowd