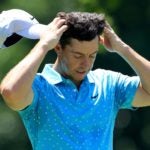 Just two players broke 70 on Saturday at the Memorial Tournament, and that number could be even lower on Sunday.

Three rounds are in the books at the Memorial Tournament, but the carnage has only just begun.

Following a Saturday in which only two players managed to break 70, Muirfield Village and the PGA Tour released a final-round pin sheet so diabolical, one could be forgiven for thinking it a work of satire.

Of the 18 holes at Muirfield Village on Sunday, only the 17th hole, a 478-yard par-4, has a pin that is more than five yards off the edge of the green in both directions. Tallied together, the average distance of the pin from the right or left edge of the green is 3.94 yards.

Of course, those numbers are to say nothing of the positions the pins are placed within the greater context of the green. Many holes are tucked between bunkers, require a shot over water, or feature some other hazard in close quarters to the flagstick.

All afternoon, players at the Memorial will be forced to hit tiny slivers of bentgrass with great precision in order to put themselves in position to make birdie. When factoring for the 30 mph wind gusts and greens rolling at a 13 (or faster) on the stimpmeter expected Sunday, it’s no wonder Jon Rahm contended his Saturday 68 could be “one of the best rounds of golf that I’ve played in my life.”

It’s possible (and perhaps likely) that we’ll see havoc Sunday akin to some recent U.S Opens. In fact, tournament host Jack Nicklaus admitted Thursday he uses the conditions at the national championship as a barometer for the Memorial.

But it’s also possible that’s a good thing. That the 65 golfers teeing off Sunday at Muirfield Village represent a large percentage of the best players in the world, a fact that should be represented in the difficulty of the courses they play. That the chaos is fun.

It’s also possible that the carnage is equitable. That good shots will largely still be good shots, even as bad ones are punished. That the course is not inherently unfair, even if some players see bad breaks on good shots,. After all, each of the 65 players teeing off will play the same 18 holes, and most of those who wind up near the top of the leaderboard will play them in the same conditions.

Sure, the course might leave some players miffed, but challenging setups often do. In 2018, the conditions on Saturday at Shinnecock Hills led Zach Johnson to famously assert the USGA had “lost the course,” while Phil Mickelson was nearly disqualified for backstopping his own putt rather than seeing it roll off the green. A day later, Brooks Koepka became only the second player in 66 years to win consecutive national titles, his star legitimized by conquering the conditions as much as the field.

For the second time in two decades, the PGA Tour is seeing courses dismantled and detoothed by massive distance gains. By tweaking the setup, Nicklaus and company have ensured the Memorial will crown a worthy champion, not just a long one.

“The USGA has got to wake up sooner or later, the R&A,” Nicklaus said Thursday on the Golf Channel’s broadcast of the first round of the Memorial. “They can’t keep burying their heads to this. They see it, they watch television, they see where these guys hit the golf ball. It isn’t about how far they hit it. You just can’t keep making golf courses longer. You just don’t have enough land. You don’t have enough money to do it.”

Between last week’s Workday Charity Open and the Memorial, MVGC director of grounds operations Chad Mark and his staff have done a masterful job crafting a course setup not only capable of withstanding eight tournament rounds, but equally adept at growing more challenging with each passing round. On Sunday, they deserve credit for showing us golf as it is in 2020 (at the Workday), and as what it too often isn’t — carnage and all.

So, will Muirfield Village wreak havoc? Maybe. Will it be boring? Hell no.