Ed. note: The Rolex featured in this story will be actioned by Phillips on Dec. 10. To follow or participate in the auction, click here. Phillips will also live stream a conversation with Jack Nicklaus on Dec. 9 at 7 p.m. You can view the stream here.

For more than 50 years, as he toured the globe as the dominant golfer of his generation, Jack Nicklaus kept one piece of equipment constant: a solid-gold Rolex, the first timepiece he ever owned.

His connection to the watch traces back to 1966, when he traveled to Japan for the World Cup (then known as the Canada Cup), an event that would later become the World Cup. There, Arnold Palmer, a Rolex ambassador, invited Nicklaus and Gary Player to a Rolex-hosted event. Luxe timepieces were offered up as gifts.

As Nicklaus surveyed the elegant designs, Player chimed in over his shoulder, pointing to a watch with a shiny golden band.

And so he did.

Beginning in 1967, when the Rolex was delivered to him, and for more than a half-century after, everywhere that Nicklaus went, the watch went with him. It was in his possession when he captured the last 12 of his 18 major titles, just as it was for more practice rounds and pro-ams than he can count. The Rolex became ingrained in his golf routine.

“Anytime I won a tournament, or finished any round, I’d take the watch out of my bag, put my wallet in my pocket, put my watch on, and we’d take pictures,” Nicklaus says. 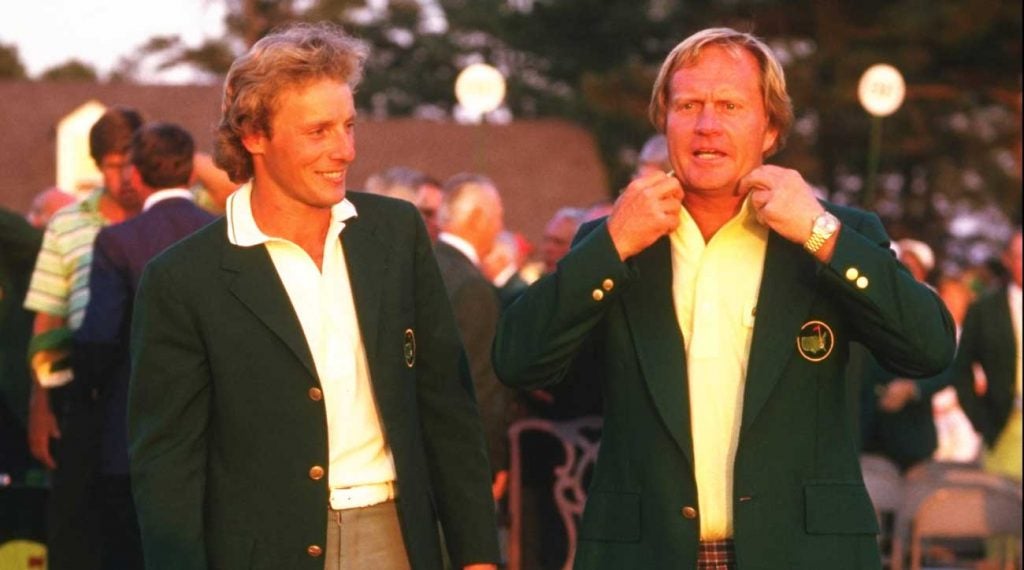 The watch, he says, was “a part of me,” acquiring immeasurable sentimental value. But there’s a time for everything, and Nicklaus has decided that it’s time this timepiece supported a greater good.

“If something that means as much to me as that watch can help make a child healthy, that’s worth far more to me than it sitting in a drawer some place,” Nicklaus says.

Since 2004, when Jack and his wife, Barbara, established it, the Nicklaus foundation has raised more than $100 million for children’s health care. Auctioning the Rolex is bound to bump that sum substantially.

The watch is a Rolex Day-Date model, the most prestigious in the Rolex collection, with a band and case of solid 18-karat gold, and a champagne-colored dial fitted with 18-karat hour markers, which are tapered and faceted in a design evocative of golf tees. The pie-pan-style face has a sweeping second hand, and it displays both day and date, with the day spelled out, the first wristwatch to ever boast that feature. A modern version of the same watch commands a retail price today of $31,550 — a hefty figure but a tiny fraction of what the Nicklaus watch will likely fetch, given its provenance and pedigree.

“We expect it to do quite well,” says Paul Boutros, senior vice president and head of watches, Americas for Phillips, the auction house that will handle the sale.

Exactly how well is hard to say, but for a sense of the allure of celebrity-owned, luxury timepieces, consider the Rolex Daytona owned by the actor Paul Newman that Phillips auctioned off in 2017. Going once. Going twice. Sold! For $17.8 million, the highest-ever auction price for a watch.

As for Nicklaus’s Rolex, Boutros and his colleagues will begin to get a handle on the starting bid in the coming months, when, like the Golden Bear in his prime, the watch will go on tour. Its first stop will be the Memorial Tournament, in Ohio, this week, followed by the U.S. Open at Pebble Beach in June, then on to London, Geneva, Hong Kong and Los Angeles, among other locations. At each stop, prospective buyers will be given an up-close audience with the watch, and even get a chance to strap it on.

The watch will go on the block on Dec. 10, at Phillips’ headquarters in Manhattan, as part of what Boutros says will be “a tightly curated” auction of luxury timepieces. In a fitting gesture, Phillips will donate its fee from the sale of the Nicklaus watch to Nicklaus Children’s Health Care Foundation.

“Barbara and I have supported children’s health care for almost 55 years,” Nicklaus says. “Some of the stories I can tell about kids have been unbelievable. To see a healthy child is a lot more important than a four-foot putt.”