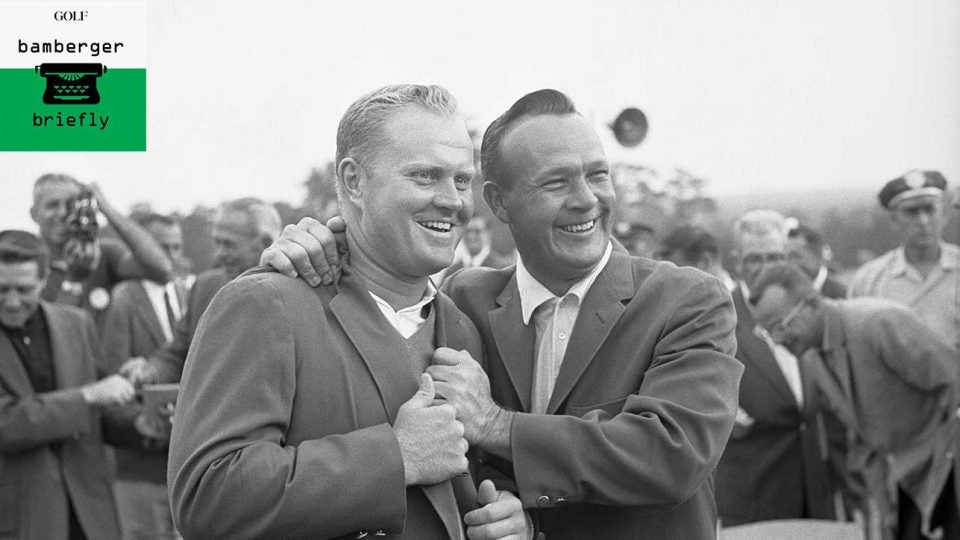 Where does course design fit into the rivalry between Arnold Palmer and Jack Nicklaus?
Getty Images

Ed. note: Well, Big Jack still has the record on a solo basis! Tiger Woods will have to wait until November to try to match Nicklaus’s six Masters titles. This week, Bamberger, Briefly comprised five short pieces in which the 18-time major champion opined on this and that. Monday: Golf with Peyton Manning. Tuesday: Life with Barbara. Wednesday: Augusta in November. Thursday: Colorblind golf. Today: Competing architects.

I played only two rounds of golf in March, but they were memorable. One was at a private course in Ormand Beach, Fla., called the Oceanside Country Club. It’s a spectacular course in a spectacular setting that dates back to 1907. Oceanside is credited to a local landscaper named P.F. Seabloom. Is it possible, way back then, that Donald Ross and Charles Blair Macdonald heard about the Ormand Beach course and said something like, “Who is this P.F. Seabloom and how did he land that job?” Well, human nature is human nature and golf-course architects are collegial, but competitive, too.

The other round I played was at a municipal course in North Palm Beach, Fla., designed by a local resident named Jack Nicklaus. I played the course with my friend Rees Jones, a golf-course architect whose brother is an architect, too, as was their late father. Rees could see things in the NPB course that an ordinary golfer would not see, how the fairways slope to a pond, the kind of sand used. I’ve heard similar comments from other architects over the years. What’s left unsaid is, “This is how I would have done it.” Human nature is human nature and golf-course architects are collegial, but they’re competitive, too.

As a golfer, Jack Nicklaus was famously competitive. Arnold Palmer loved to play. Ben Hogan loved to hit balls. But Nicklaus loved to compete, to beat you or die trying. Talking to Nicklaus recently, I was curious to know how his competitive golfer side showed up on his second profession, as a course architect. (And here we should mention that Nicklaus’s design company sits under the same corporate umbrella as this website.) I asked Jack if he felt the same kind of competitiveness with his fellow architects that he felt with his fellow players.

“I haven’t talked to enough of them to worry about it,” Nicklaus said. “When I get around Tom Fazio or Rees Jones or somebody else, I don’t talk golf courses. We just talk. I think that we all want to see our golf courses at the top of the lists. But we all have our beliefs for how we do things, how we’ve done things, how we think is the right way to do things. But that can’t be the same competition as when you’re playing.”

“Arnold and I handled design totally differently,” Nicklaus said. “Arnold’s part of design was public relations. He was not really concerned about the golf course. He’s got some nice facilities, but I don’t think there’s a lot of Arnold in his golf courses. I was more concerned about the golf course. I was not oriented towards the party, or sitting back and taking credit. I think we did different things. But we both served a purpose within the game.”

The thing missing here is Arnold’s rebuttal. Jack will be the first person to tell you. Those two spurred each other on, in everything. Call that what you will.

Michael Bamberger welcomes your comments or suggestions at Michael_Bamberger@GOLF.com